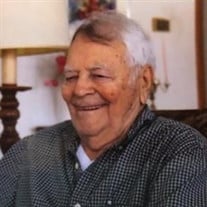 Anton “Tony” Charles Meister, passed away on March 19th at the age of 92. He was born in Milwaukee on October 8th, 1929, to Anton George Meister Jr. and Margaret (Boerner) Jones. Tony attended Messmer High School in Milwaukee and earned a Master of Social Work from UW Madison. In 1955 he and Carol married. This June would have been their 67th wedding anniversary. That same year, he and Carol moved to Fond du Lac. Tony was very dedicated to his community and helping people. Tony began working as a child welfare worker for the Wisconsin Department of Children and Youth. Tony spent several years as a state probation and parole officer and school social worker at the Fond du Lac County Child Guidance Clinic. He later worked as a school social worker in the Lomira and Rosendale School Districts. After twenty years of service, he retired from Fond du Lac Mental Health Center. In retirement, Tony continued private practice and was a part-time mediator in Fond du Lac’s Family Courts. He was a devoted and loving husband, father, sibling, and grandfather. He and Carol were proud parents of Tony and Andrew (Marisa) Meister and were blessed to have four grandchildren: Garrett, Taylor, Avett, and Mae. Tony is survived by his wife, two sons, daughter-in-law Marisa, sisters Gloria Killian, Alice Gellert, Linda Meister-Reid, brother-in-law Steven Reid, his niece Dana Caridi, and nephews Robert Gellert, Sean Killian, and James Killian. He was preceded in death by his father: Anton George Meister, mother: Margaret Jones, sister: Lucy Kapuscinski, and brother: Edward Meister. Tony possessed a strong work ethic that included serving his community. He served as a board member of Friends of the FDL Senior Center, Residential Services, Friends of Taylor Park and Pool, FDL County Employees Credit Union, FDL City Parks Advisory Board, and FDL Visiting Nurses Association. Even in his later years, Tony used his skills as a mediator for FDL small claims court. Tony enjoyed the outdoors. He and Carol purchased 80 acres in Marquette County, where he planted thousands of pine trees, camped, fished, hunted, and swam in the White River with family and friends. The “Riverland” became the favorite gathering place for family and friends to gather for over 50 years. He was an avid fisherman, fishing from a canoe, until his early 80’s. He was a superfan of the Wisconsin Badgers and the Green Bay Packers and never missed a televised game, often vocally agonizing over his team’s mistakes or misfortune. Tony’s legacy of love for his family, their gatherings, and the Riverland will continue with his children and grandchildren. He will be greatly missed. His was a life well-lived. In lieu of funeral services, please celebrate Tony’s life at: www.forevermissed.com/anton-charles-meister/about Please do someone a good deed in place of sending flowers or making a donation. Tony would have liked that.

The family of Anton C. Meister created this Life Tributes page to make it easy to share your memories.

Anton “Tony” Charles Meister, passed away on March 19th at the...

Send flowers to the Meister family.