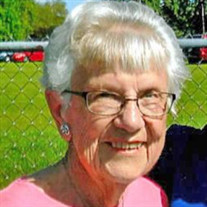 Ardis May Smith, 91, of Van Dyne, passed away on Monday, August 17, 2020, at Hospice Home of Hope. She was born on May 23, 1929, in Oshkosh, the daughter of George and Rose Abraham Beduhn. On April 15, 1951, she married George R. Smith, at First English Lutheran Church in Oshkosh. He preceded her in death on December 16, 2012. Ardis was a lifelong member of First English Lutheran Church in Oshkosh. She worked in the North Fond du Lac School System for 30 years in the lunch program. She helped her husband George on the farm and liked driving tractor and bailing hay. Ardis was a 4-H leader for many years. She became an instrumental part of planning family reunions since 1947. Her family was the love of her life. She is survived by her children: Craig (Carol) Smith of Townsend and Cathy (special friend Dave) Hoppe of Van Dyne; five grandchildren: Karie (Dave) Tackett, Michael (Amanda) Smith, Shawn (Melissa) Hoppe, Chad (Kelly) Hoppe and Troy (Leah) Hoppe; eight great-grandchildren: Cole Strupp, Noah Hoppe, Kaylee Tackett, Ashton Hoppe, Layla Smith, Benjamin Smith, Adelaide Hoppe and Alexandra Hoppe. She was preceded in death by her parents, her husband, five siblings: Norman, Marvin, Carl, George and Mabel. Due to the pandemic, private family graveside services will be held at Lakeview Cemetery. Cremation has taken place. In lieu of flowers, memorials appreciated to Juvenile Diabetes, www.jdrf.org.

The family of Ardis M. Smith created this Life Tributes page to make it easy to share your memories.

Send flowers to the Smith family.