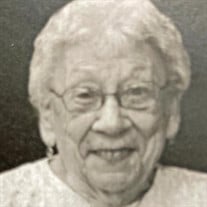 Arline Wisse, age 96, passed away on October 15, 2020 in her home of 50 years. Arline was born on February 23, 1924 in Sheboygan County, the daughter of William and Mary Van Ess. On May 26, 1948 she married John Wisse in Hingham,WI. He preceded her in death on May 28, 1992. Arline was a proud and active member of Grace Evangelical Free Church (formerly Grace Reformed Church). She attended weekly services, participated in Bible study groups and taught Sunday School. She loved listening to the choir, especially their cantatas. Arline was a very kind, caring, and giving woman. She was proud of her work as one of the first Teacher’s Aides in the Fond du Lac School District in the kindergarten and special education programs. In retirement she knit hundreds of caps and sweaters for children in underprivileged countries. They were distributed by the World Vision program, Knit for Kids. Arline also clipped postage stamps collected by church and family members in support of the Stamps for Missions program which purchases and distributes Christian Literature for third world countries. Arline lived out her faith showing that a life with God was better than one without Him. Arline’s family brought her the most joy. She enjoyed their visits, teaching them about gardening, helping them with projects, baking goodies for them and sharing recipes. She attended as many family events and activities as she could. She was an avid Wisconsin sports fan following the Badgers, Packers, Bucks, and Brewers closely. Spending time on her computer was part of Arline’s daily routine. She enjoyed staying in touch with her countless cherished friends and family members through email and by talking to them frequently on the phone. Lunches with friends after Sunday church services also kept her connections strong. Another part of her routine was watching the birds at her numerous feeders and bird baths as she sat by her kitchen table. Arline is survived by her children: Mary Wisse, Thomas (Jayne) Wisse, and Deborah (Roger) Springborn; three grandchildren Jeremy (Shannon) Wisse, Robert (Stephanie) Springborn, and Jennifer (Daniel) Zirbel; five great grandchildren Nevada and Keynen Wisse, Mason and Jack Springborn and Savannah Zirbel. She is further survived by her sisters: Laverne Joosse and Edna (Paul) Koskamp; many nieces, nephews, and friends. In addition to her husband John, she was preceded in death by her sister-in-law Marie Jensema and her husband Ellsworth, brother-in-law Adrian Joosse, and great grandson Sebastian Wisse. Due to current circumstances, a celebration of her life will be held at a later date. A private family memorial service and burial will take place. Memorials in Arline’s name may be given to World Vision.

The family of Arline Wisse created this Life Tributes page to make it easy to share your memories.

Send flowers to the Wisse family.