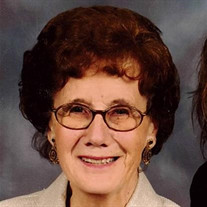 Beulah Hollander, 88, of Brandon, passed away unexpectedly on Friday, April 12, 2019, at Fond du Lac Lutheran Home, following a stroke and fall. Beulah Radke Hollander was born October 7, 1930 in Brandon, the daughter of Mildred Baber Radke and Oscar Radke. Beulah graduated from Brandon High School in 1948. After graduation she worked at the Ripon State Bank in Ripon as secretary and a bookkeeper. On May 27, 1950, she married Myron Hollander. Three children were born to this marriage, Sandy, Tom and Randy. They lived and farmed on the Hollander homestead for many years. Beulah was a member of Peace Lutheran Church, Rosendale her entire life. She taught Sunday School and was president and treasurer of the Ladies ELCA group for many years. After the death of her husband in 1991, she began volunteer work at the Fond du Lac Lutheran Home and the Auxiliary. Later she was named an officer of the Auxiliary and served for many years. Over the years she helped plan countless events for residents and she orchestrated numerous events which introduced potential members to the Auxiliary. She also started the “Treasures Unlimited” gift shop, which began with a humble gift room, which required workers to sit out in the hallway and catch the people as they walked by. Later the gift shop moved to a beautiful remodeled “Treasures Unlimited” gift shop, which was much larger and had lots of lovely gifts and some homemade items. Homemade quilts were also ordered and sold. Beulah spent countless hours at the Lutheran Home making crafts with the residents, helping with Bingo, being present at weekly ice cream socials and organizing resident parties. She was the co-manager of the gift shop. She was named “Volunteer of the Year” for her dedication and time. Also she spent many hours on the buying trips for the gift shop, always on the lookout for less costly items residents and family members could afford. Proceeds from the gift shop enabled the residents to have a better quality of life. In 2001 Beulah was honored by the WAHSA (Wisconsin Association of HOMES and SERVICES) for the aged at the Paper Valley Hotel and Convention Center in Appleton for the regional volunteer service award for region 6, nominated by the Fond du Lac Lutheran Home, Inc. In 2000 she volunteered 972 hours at the home and was again named “Volunteer of the Year”. In 1969 and 1972 Beulah was the 1st Place Winner of the “June Dairy Month” baking contest sponsored by the Fond du Lac Farm Bureau. She represented Fond du Lac County by appearing two different times on live TV, WBAY in Green Bay for the district bake-off. Beulah was a member and officer for the Rosendale Town and Country Homemakers for many years. She also was a sewing project leader for the Rosendale 4-H Club. Beulah and Myron traveled a lot and for their 25th wedding anniversary they went to Hawaii. They visited almost every state plus Canada, and took many cruises to South America and the Bahamas. Beulah and Myron played couples dartball and she also enjoyed league bowling after being alone for many years. She enjoyed time with her grandchildren. There were many fishing trips, farm trips, crafts and games. Beulah will be greatly missed. She is survived by her daughter, Sandy (Garry) Andersen of LaCrosse, daughter-in-laws: Barbara Hollander of Rosendale and BeLinda Hollander of Brandon; her grandchildren: Joel (Heather) Hollander of Rosendale, Pamela Andersen of Chicago, David (fiancé Paulina) Andersen of Roscoe, IL, Courtney Hollander of Rosendale, Greg Hollander of Rosendale, Amanda Hollander of Rosendale and Joshua Hollander of Madison, great-granddaughter Brinley Hollander of Rosendale; her sister, Ellene Caramanidis of Oshkosh; and her brother-in-law Donald (Bernice) Hollander of Ripon She is preceded in death by her parents, her husband Myron Hollander, her sons: Tom Hollander and Randy Hollander; brother Alfred “Buzz” (Merlyn) Radke, brothers-in-law: Mike Caramanidis, Arlyn (Jean) Hollander, Lester (Lois) Hollander and Senator Walter G. and Lydia Hollander. VISITATION: Friends may call on Tuesday, April 16, 2019, from 9:00 – 11:00 a.m. at Peace Lutheran Church, 124 South Main Street, Rosendale. FUNERAL: Funeral services will be held on Tuesday, April 16, 2019, at 11:00 a.m. at Peace Lutheran Church, with Rev. Charles “Chuck” Thompson officiating. Burial will follow in Rosendale Cemetery. Kurki-Mach Funeral Chapel & Crematory is serving the family, www.kurkimachfuneralchapel.com. 920-921-4420

The family of Beulah Hollander created this Life Tributes page to make it easy to share your memories.

Beulah Hollander, 88, of Brandon, passed away unexpectedly on...

Send flowers to the Hollander family.