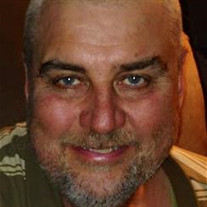 On Thursday, November 28th Brian Beltz passed away unexpectedly at the age of 62. A wonderful soul was added to Heaven on Thanksgiving morning. He was born to Marilyn and James Beltz on June 15th, 1957. He was a graduate of Winnebago Lutheran Academy and a member of Good Shepherd Lutheran Church. He was married to Carol A Wendt on September 26th, 1981. He grew up on the family dairy farm on Brookside Road, just south of Fond du Lac in the Town of Byron. It was this farmstead where he would spend the rest of his days. From riding his dirt bike around the property as a kid to taking his kids and grandkids on 4-wheeler rides he enjoyed spending time out and about. He carried on the tradition of dairy farming from his parents James and Marilyn. Later on, after hanging up the milkers in 2014, he worked at Mills Fleet Farm and Rolling Meadows Golf Course with some co-workers that have become very close friends. He was a loving Son, Brother, Husband, Father, and Grandfather. He was a big man with a soft heart who had a lot of love for his wife, four children, and two grand-daughters. He loved the great outdoors, which originated from his childhood spent roaming the Beltz acres. Even though farming wasn’t always the easiest, he loved what he did. His wife and children agree that it wasn’t always easy, but growing up on the farm made them who they are today. Some of his family’s fondest memories were memories made in the barn, out in the fields, walking through the woods or the creek bottom. He enjoyed hunting and fishing, and he especially enjoyed goose, turkey, and deer hunting and passed that passion onto his children. He had a humorous personality and was a great storyteller. He was always ready to crack a joke or pull some pranks on those he was close to. He passed his great sense of humor onto his children who have countless stories to remember him by. He had a large circle of family and friends who always looked forward to being around him because of his jovial charm. He enjoyed nights out bowling, playing cards, or playing dartball. These are nights where many laughs were undoubtedly shared. He had a unique way of making those around him feel cared about. Whether it was with a small gesture or big, everyone close to him was well-loved. His family was especially fond of his impressive ability to cook and bake. All of the Beltz kids could easily be rounded up at the farm with the mention of one of his famous fish fries, homemade pizzas, or chili. And there was always an expectation of dessert. He never disappointed with his apple slices, pies or chocolate cake. Even though farming was his occupation he was a teacher every day. He made every experience on the farm or in the kitchen a teaching moment with his kids. Everyone took turns helping him cook from his oldest daughter down the line to his two grand-daughters. He was preceded in death by his father James Beltz and Father and Mother-in law James and Fern Wendt. Those left behind to cherish his memory include his mother Marilyn Beltz, as well as his wife Carol of 38 years and his children, Sara Beltz, Michael Beltz, Travis (Michelle) Beltz, and Katie (Justus) Trewin; and his grand-daughters Kristen and Kelly Odekirk. Siblings left to cherish his memory include his sister Julie (William O’Laire), and sister Mary Beltz. He will also be remembered by several nieces, nephews, and cousins. A special thank-you to all the paramedics, first responders, sheriff’s deputies, and medical examiner who were all very kind, compassionate, and helpful in our time of need. The family will receive friends on Thursday, December 5th, 2019 from 9 a.m. - 1 p.m. at Good Shepherd Lutheran Church 855 Martin Ave, Fond du Lac, WI 54935. There will be a memorial service Thursday, December 5th, 2019 at 1 p.m. at Good Shepherd Lutheran Church with Pastor Adam Zimpleman officiating. Cremation has taken place.

On Thursday, November 28th Brian Beltz passed away unexpectedly at the age of 62. A wonderful soul was added to Heaven on Thanksgiving morning. He was born to Marilyn and James Beltz on June 15th, 1957. He was a graduate of Winnebago Lutheran... View Obituary & Service Information

The family of Brian J. Beltz created this Life Tributes page to make it easy to share your memories.

Send flowers to the Beltz family.