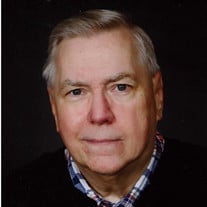 Bruce W. Schierstedt, 77, of Fond du Lac went to his heavenly home on Tuesday, June 7,2022, surrounded by his family. Bruce was born on August 9, 1944, in Cicero, Illinois, the son of Willard E. and Laverne J. (Kotecki) Schierstedt. On August 14, 1965, he married the love of his life, Susan Kistenbroker in Forest Park, Illinois. Job related moves took Bruce and Sue from Forest Park, Illinois to Menomonee Falls, Wisconsin in 1968. In 1976, Bruce and his family moved to Fond du Lac, Wisconsin, as a career move. In 1985, Bruce enrolled in UW-Oshkosh, full-time, to finish his bachelor’s degree after receiving education at Northwestern University and UW-Whitewater while employed. His career included Thomas McKinnon Securities, Chicago: Bonds, Treasury and Stock Cashier; Bentley Welding Supply, Milwaukee: Systems Analyst and Developer and Sales; Tri-Welders Supply Co., Inc., Fond du Lac: Office Manager/ Assistant Sales Manager. Before retirement in 2011, Bruce was an Information Systems Specialist at the University of Wisconsin Oshkosh, College of Education and Human Services. In 2011, upon their retirement, Bruce and Susan Schierstedt founded the Schierstedt Scholarship at UW-Oshkosh for students majoring in education. In retirement, he has been one of God’s precious servants supporting technology in his church and for Care In the Name of Christ, Inc., Fond du Lac, as well as serving in various roles for Crossways Camping Ministries and the East Central Synod of Wisconsin, ELCA. Bruce was an active member of Church of Our Saviour, serving on the Finance/Stewardship Committee and as congregation president in past years. Bruce lived out his faith in the Lord Jesus and his belief that generosity is a state of heart, not of one’s wallet. God, our provider of all things, is gracious and loves to bless His children. Confident in His provision, we give liberally out of it. We are generous, because God has been and continues to be generous with us. He was a proud Drummer in the Winfield Scott Rebels Drum & Bugle Corp 1962-1964, Drummer and Drum Major in the Diplomats Drum and Bugle Corp, James J. Zientek Post 419, American Legion, Chicago 1964-1966, and Instructor & Creator of Marching & Maneuvering Routines & Program in the Colonels Drum Corp, Franklin Park, IL, 1965-1966+. He is survived by his wife Susan of 56+ years; his daughter, Jeanne L. Schierstedt of Racine, Wisconsin; and his son, Mark T. Schierstedt of Fond du Lac, Wisconsin. He is also survived by his brother-in-law, David H. Kistenbroker (Cynthia Heusing) of Chicago and children: Hillary (Kyle) Colonna and daughter Genevieve; Allison, Charlotte, and Graham; his sister-in-law Joan (Neil) Dacey Schierstedt and by many cousins. He was preceded in death by his parents and his brother, Neil E. Schierstedt of Berwyn Illinois, Aunts Eleanor (Kotecki) Ebenroth and Ruth (Kotecki) West, and Uncle Herbert Kotecki. We are profoundly thankful to the Chaplains Peter Capoyianes and Amy Golz for their care of the family during Bruce’s brief hospitalization and to all the nurses, doctors, and other professionals of St. Agnes Hospital. Visitation will be held on Saturday, June 25, 2022, from 9:30 – 11:00 a.m. at Church of Our Saviour followed by a service of celebration at 11:00 a.m. with Pastor Crystal Lee officiating. In lieu of flowers, memorials may be sent to Crossways Camping Ministries, 912 N. Oneida St., Appleton, WI 54911, crosswayscamps.org or to Church of Our Saviour, Fond du Lac.

Bruce W. Schierstedt, 77, of Fond du Lac went to his heavenly home on Tuesday, June 7,2022, surrounded by his family. Bruce was born on August 9, 1944, in Cicero, Illinois, the son of Willard E. and Laverne J. (Kotecki) Schierstedt. On August... View Obituary & Service Information

The family of Bruce W. Schierstedt created this Life Tributes page to make it easy to share your memories.

Send flowers to the Schierstedt family.