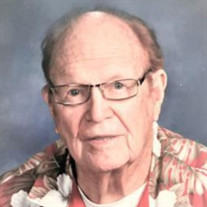 Clare (Red) La Plante, age 94, died on December 19th in home hospice, surrounded by his family. He was born on September 9, 1926 in Suamico, Wisconsin to Howard La Plante and Amelia (nee: Malchow). He was preceded in death by his brother and sister-in-law Howard, Jr. and Helen La Plante, as well as his sister and brother-in-law Carmen and Don Schmechel. Red married Patricia Alderton on June 14, 1947 at St. Leonard's in Laona, Wisconsin and this past June they celebrated their 73rd wedding anniversary. They raised 7 children: John (Sue) La Plante of Port Charlotte, FL Fr. David La Plante of Hartford, WI Barb Schuppe (Dick Backler) of Fond du Lac, WI Deb La Plante (Jan Kaulins) of Manitou Beach, MI Suzie La Plante (Dallas Janssen) of Des Moines, IA Kathy La Plante (Therese Paulick) of Pembroke, NH Jeanne La Plante of Columbia, NC Red is also survived by eight grandchildren: Justin La Plante (Madison, WI), John (Ann) La Plante, Frankfort, KY), Kristin (Jeff) Loomans, (Waupun), Jesse (Jessie) Laake (Des Moines), Jennifer Laake (Wilmington, NC), Julia (Draco) Laake, (Westminster, C0), Jesse (Moira) La Plante (Lafayette, CO), Sam La Plante (Columbia, NC) and Aidan Kaulins (Manitou Beach, MI). He has one great granddaughter Beck (Daniel) Frame (Madison), three great grandsons Shawn and Gino La Plante (Frankfort, KY) and Tyler (Angela) Schuppe (New Braunfels, TX) who blessed him with five great, great grandchildren (Landon, Anthony, Cecelia Claire, Daniel and Felix). He is also survived by many nieces and nephews, great nieces and nephews, and great-grand nieces and nephews, as well as other family and friends. Red served in the Army during WW II in the Philippines and was part of an honor guard in Washington, D.C. following the war. For most of his working career, he was employed by the Chicago and Northwestern Railroad in both Green Bay and Fond du Lac, retiring as a District Sales Agent. He was also an avid gardener, sales and marketing enthusiast, having created "Robin Hood's Barn" as an outlet for everything from leather wallets to a huge variety of other flea market items. He always gave good deals to everyone and was known for his great generosity. He had a great sense of humor and was known as a prankster. He was also a distinguished member of Toastmasters, Kiwanis, and a volunteer soup cook and pie maker at Covenant United Methodist Church of Fond du Lac. He, and a small group of Kiwanians, sold hundreds of tickets each year for their annual Pancake Breakfast fundraiser. He certainly represented the self-less life of others from "The Greatest Generation." He was honored as Fond du Lac's Senior Volunteer of the Year. Some leisure time activities including playing cards, shaking dice, traveling to the family cottage for gatherings, cruises, and trips to Las Vegas, Hawaii, and participating in an Honors Flight to Washington, D.C. The family would like to express special thanks to the Agnesian Home Hospice Team for helping our family with my father's care during his last days. Thanks also to Dr. Frederickson, his longtime physician. Thanks are also extended to his care givers over the past years, including: Nicole, Delores, Theresa, Christin, Jodee, Brittany, and others. They have been a great support to my father and mother and became part of our family. Visitation will be from 9:30 - 11:30 AM, with an 11:30AM service, at Covenant United Methodist Church of Fond du Lac on Wednesday, Dec. 23. Attendees are asked to follow COVID-safe guidelines, including wearing of masks. Arrangements have been handled by Kurki Funeral Home. Memorials can be given to Covenant United Methodist Church (20 N. Marr St.) of Fond du Lac, or to the Save the Lakeside Park Peninsula Fund/Friends of Lakeside Park; https://lakesidepark.org/donate/

Clare (Red) La Plante, age 94, died on December 19th in home hospice, surrounded by his family. He was born on September 9, 1926 in Suamico, Wisconsin to Howard La Plante and Amelia (nee: Malchow). He was preceded in death by his brother and... View Obituary & Service Information

The family of Clare La Plante created this Life Tributes page to make it easy to share your memories.