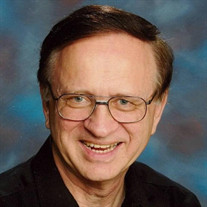 Darrell W. Koplitz, 77, of Fond du Lac, passed away on Tuesday, November 9, 2021, at St. Agnes Hospital. He was born on September 4, 1944, in Oshkosh, the son of Norman and Ruth (Abraham) Koplitz. At age 13, he started musical performances for Christmas parties, weddings and anniversaries and later began his own band the Kopy Kats, playing over 4,000 performances. He was a graduate of Oshkosh West High School, Class of 1962. He graduated from UW-Oshkosh with degrees in Math and Chemistry in 1967. He met his one and only Bonnie R. Butz, in college, and married her on June 17, 1967, at St. Peter’s Lutheran Church in Fond du Lac. He taught for 46 years at Rosendale School District, where he was able to teach his favorite class, Calculus. While at Rosendale he started the RB Investment Club, and was a member of the Hamilton Investment Club. Darrell also taught Computer Science at Moraine Park Technical College for 21 years. Darrell always wanted to start his own business, and began Koplitz Rentals, which materialized into 18 units. He was a member of the Fond du Lac Yacht Club, and was also a member of First Church of Christ Science, where he was a reader, treasurer and usher. He was a church organist, choir director, a tuba member of Oshkosh Civic Band, Oshkosh VFW Band, and the Fond du Lac Symphonic Band. Some of Darrell’s favorite moments in life were riding his boat on Lake Winnebago, playing White Christmas on the piano, and is favorite song was “My Way” by Elvis Presley. Together Darrell and Bonnie had two daughters: Kelly Rose and Kollette Lynn; two grandchildren: McKenna Rose and Tyler Brandon, and beloved dog Benji. He is further survived by his brother Ron (Mary Ellen) of Arizona, his aunt Phylis Zentner of Oshkosh, cousins and many friends and life-long friends Gary and Addy Jackson of Fond du Lac. He is preceded in death by his parents. Private services were held on Thursday, November 11, 2021, at All Faiths Mausoleum in Rienzi Cemetery. “To those leaning on the sustaining infinite, today is big with blessings” MBE

Darrell W. Koplitz, 77, of Fond du Lac, passed away on Tuesday, November 9, 2021, at St. Agnes Hospital. He was born on September 4, 1944, in Oshkosh, the son of Norman and Ruth (Abraham) Koplitz. At age 13, he started musical performances... View Obituary & Service Information

The family of Darrell W. Koplitz created this Life Tributes page to make it easy to share your memories.

Send flowers to the Koplitz family.