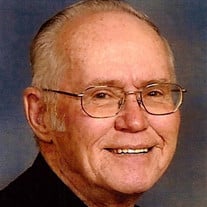 Darwin L. Anibal, 80, of Oakfield, unexpectedly passed away on Saturday, November 2, 2019 at his residence, where he lived for the past 25 years. Darwin was born on August 21, 1939 to Leo and Charlotte Anibal. He grew up on a dairy farm and attended Braham High School, in Minnesota, where he played football and sang in the choir. Darwin and his buddies loved old cars and created plenty of mischief with them. He tried to enlist in the Army, but didn’t pass the physical exam. After graduating, he worked several different jobs before entering an apprentice program to become a professional baker. Darwin married the love of his life, Elna Ann Melin, on September 24, 1960, and together they raised four children. His apprentice training served him well and he owned his own bakery and lived on a hobby farm in Lindstrom, MN. Farming was a family activity and his family was growing. They set out in search of a farm which brought them to Thorp, WI. Darwin farmed from 1974 – 1986. He always did his best thinking while milking the cows. In the fall of 1989 they moved to North Fond du Lac with Copp’s bakery. Darwin baked there and at Recheck’s in Waupun until his retirement in 2004. Darwin had a unique sense of humor and had a knack for finding the positive. He loved his family and spending time with them, and always made sure to let them know he loved them very much. He had a huge heart that stopped, but the legacies and influences he left behind will last forever. His love for people and his willingness to do anything to help out will be missed. He was a simple man who was down to earth. His hobbies included hunting, fishing, making wood and caring for his lawn and garden. He is survived by his loving wife, Elna, his children: Lori (Stan) Miller, Cory Anibal, Lynn (Randy) Jensema and Chris Anibal; five grandchildren: Craig (Sasha) Miller, Erin Miller, Eric (Natalie) Jensema, Zachary (Sarah) Jensema and Jeremy (Amy) Jensema; five great-grandchildren: Madelyn and Daxton Jensema, Jaethan and Alexander Jensema and Naomi Miller; his sister, Arliss Engebretson and his nieces and nephews. He is preceded in death by his mother, father and stepmother. VISITATION: Friends may call on Friday, November 8, 2019, from 9:00-11:00 a.m. at Edgewood Community Church, 609 Thomas Street, Fond du Lac. FUNERAL: Memorial services will be held on Friday, November 8, 2019, at 11:00 a.m. at Edgewood Community Church, with Rev. Jeremy Thompson officiating. Cremation has taken place. Inurnment will be at Avoca Cemetery, Oakfield. In lieu of flowers, memorials appreciated to Edgewood Community Church.

Darwin L. Anibal, 80, of Oakfield, unexpectedly passed away on Saturday, November 2, 2019 at his residence, where he lived for the past 25 years. Darwin was born on August 21, 1939 to Leo and Charlotte Anibal. He grew up on a dairy farm and... View Obituary & Service Information

The family of Darwin L. Anibal created this Life Tributes page to make it easy to share your memories.

Darwin L. Anibal, 80, of Oakfield, unexpectedly passed away on...

Send flowers to the Anibal family.