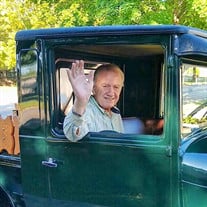 Darwin E. Lavrenz, 77, of Fond du Lac, died on Tuesday, December 7, 2021, at his residence. He was born on July 2, 1944, at his home in Campbellsport, the son of Gustav A. and Gertrude A. Dickman Lavrenz. On August 29, 1964, he married Donna Ladwig, in Plymouth. She preceded him in death on October 13, 2013. Darwin graduated from Campbellsport High School in 1962, from there he pursued a career in computer programing. His first job was at Regal Ware in Kewaskum. After years of working there he decided to broaden his horizons and enhanced computer programs for various companies: Land’s End in Dodgeville, Rexnord in Milwaukee, Appleton Paper in Appleton, and Bank One in Milwaukee. He enjoyed repairing clocks during his retirement. Darwin met a lot of wonderful people during his time repairing clocks, who became his friends. Darwin also volunteered at Second Impressions in Fond du Lac He is survived by his daughter Deanna “Dea” (John) Zettler of Fond du Lac, his grandchildren: Jessica Sinotte of Fond du Lac, Joshua (Hilary) Stephanie of Fond du Lac and Edward (fiancé Shayna Woods) Uttendorfer of North Fond du Lac; his great-grandchildren: Paxton, Emma, Oliver, Tony, Jade, Charlotte and Norah; his brothers and sisters: Bernice (Kenneth) Bastian of West Bend, Raymond Lavrenz of West Bend, Clayton (Sandy) Lavrenz of Beloit and Spencer Lavrenz of Campbellsport. He is preceded in death by his parents, his wife, his daughter Dawn Lavrenz, his brothers and sisters: Donald, Delbert, Kenneth, Beatrice, Evelyn and Joyce. The family will hold a combined visitation and memorial service for Darwin and his daughter, Dawn Lavrenz, who passed away on November 9, 2021. VISITATION: Friends may call from 11:00 AM – 2:00 PM, on Saturday, January 8, 2022, at Kurki Funeral Chapel, 31 East Division Street, Fond du Lac. SERVICE: Memorial service will be at 2:00 PM, on Saturday, January 8, 2022, at Kurki Funeral Chapel, with Chaplain Karen Kraus officiating. Inurnment to take place at Auburn Cemetery at a later date.

The family of Darwin E. Lavrenz created this Life Tributes page to make it easy to share your memories.

Send flowers to the Lavrenz family.