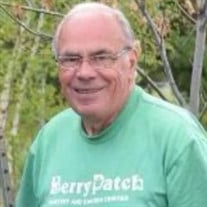 David "Dave" J. Liebelt, 81, of Fond du Lac, was called home to the loving arms of his beloved Lord and Savior on Tuesday, May 4, 2021, at Azura Memory Care in Oshkosh. He was born on January 30, 1940, in Manitowoc, the son of John and Virginia Stueber Liebelt. On August 1, 1964, he married Muriel Aasby, in Estherville, Iowa. Dave worked for the Fond du Lac Fire Department for 31 years, serving as a Battalion Chief, before retiring in 2000. He and his wife owned and operated the Berry Patch Garden Center from 1977 -2014, which continues to be operated by his two daughters. He was a member of Lighthouse Christian Church. Dave found great pleasure in attending his grandchildren's sporting events and was also an avid Packer and Nascar fan. He loved the outdoors and spent a lot of time at his hunting cabin and land enjoying nature and deer hunting. He also made several trips to South Dakota to go pheasant hunting with his buddies. Dave always looked forward to spending his winters at his Florida Home. He is survived by his loving wife of 56 years, Muriel Liebelt of Fond du Lac, his daughters: Kristi (Greg) Sennholz of Omro and Kara (Scott) Scheberl of Fond du Lac; his four grandchildren: Katelyn (Kyle) Krebs, Jared and Justin Scheberl, and step-granddaughter Becki (Brad) Lusk; his step-great-grandchildren: Jackson and Ava; his brother Robert (Marj) Liebelt of Fond du Lac, his sisters: Judy (Rudy) Wojahn of Fond du Lac, Kathy (Dan) Rubin of Oshkosh, his sister­in-law Eydie Liebelt Marx of Fond du Lac, his brother-in-law Wendell (Joette) Aasby of Fond du Lac, his sisters-in-law: Lori (Roger) Liebelt of Hico, TX and Barbara Aasby of Tulsa, OK, and several nieces and nephews. He is preceded in death by his parents, his brother Richard Liebelt, his Father-in-law and Mother-in-law Oliver and Vivian Aasby, and his brother-in-law Loren Aasby. Dave's family would like to extend their sincere gratitude to the Azura Memory Care staff in Oshkosh for the loving and wonderful care they gave him. Cremation will take place. A Celebration of Dave's Life will be held at Lighthouse Christian Church, 401 South National Avenue, Fond du Lac, on June 26, 2021. Visitation will be from 12:00 PM till time of service at 1:00 PM. Memorials appreciated to the Alzheimer's Association.

David "Dave" J. Liebelt, 81, of Fond du Lac, was called home to the loving arms of his beloved Lord and Savior on Tuesday, May 4, 2021, at Azura Memory Care in Oshkosh. He was born on January 30, 1940, in Manitowoc, the son of John and Virginia... View Obituary & Service Information

The family of David "Dave" J. Liebelt created this Life Tributes page to make it easy to share your memories.

Send flowers to the Liebelt family.