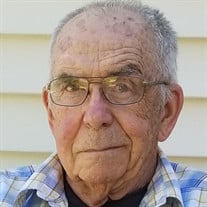 David G Smith, age 82 of Eldorado, Wisconsin passed away on Tuesday, July 13, 2021 at St. Agnes Hospital in Fond du Lac after a serious illness. He was born September 2, 1938 to William and Dorothy (Colton) Smith in Fond du Lac and raised on the family farm near Woodhull. Dave lived on Smith Road 80 years before transitioning to a new home at Tower View Villa in Rosendale March of 2020. Dave attended Woodhull Grade School and Rosendale High School, walking barefoot in six foot snow drifts uphill both ways. In the spring of 1956, Dave was invited to attend a Lenten Service at the Church of Peace in Fond du Lac. There he met Judith Ann Winters, and the young couple were married in that church on November 30, 1957. Dave enjoyed several hobbies. He loved motorcycling and was a proud member of the original Top Hats Motorcycle Club. He also liked to go to the stock car races at local tracks. Dave especially loved camping with his family. And this list would be incomplete if we failed to mention his love of good food. Dave’s appetite was legendary. Finally, Dave enjoyed being a grandfather. Mom used to say he was “crazy about that kid”, who was blessed to enjoy lots of fun times with them both. Dave will always be remembered for his work ethic. As a boy he was known to find work around the neighborhood. As a teenager he was setting pins at a local bowling alley in Fond du Lac; as a young father he worked on a mink ranch near Van Dyne, where he learned the art of pelting. Dave’s love and dedication to his wife and daughters was evident by how hard he worked to provide for them while employed at Wells Manufacturing, Frieberg Home Improvement, Fred Rueping Leather Company, and MacGregor Sand Knit, all of Fond du Lac. He even spent a short period of time in law enforcement, working as an auxiliary deputy sheriff for Fond du Lac County. Dave took his last position at Power Packaging in Rosendale in November of 1987 before retiring at the age of 70. After retirement Dave found purpose caring for the house, his ever expanding yard, and puttering around in the shed. When his wife Judy’s health began to fail, Dave became a diligent and loyal caregiver. It was his concern and commitment to her that serves testimony to his strength and his character. He was a devoted husband and father. David G Smith will be deeply missed by three daughters; Laurel Lyne Shaffer (Dan Snowden) of Appleton, LaDonne Louise Smith-who we all know as Lolly-of Rosendale, Lea Lisa (Tom) Ratajczyk of Merrill, one granddaughter Chelsea Lyne Schraven (Wyatt Seagren) of Oshkosh, and one step-grandson Chris Ratajczyk of Illinois. Dave also leaves behind sisters Edith Hernandez of Eldorado, Diann Bublitz of North Fond du Lac, half-brother Joe Vera of Oshkosh, his aunt Fran Templin of Fond du Lac, several cousins, nieces and nephews, many friends and former co-workers. Finally, Dad is survived by his lifelong friend Tom Higgins (Geri) of Iron Ridge, Wisconsin and in the wind throughout the country. Dave was preceded in death by his wife of 57 years, Judy Smith. He had also lost his parents, a brother, two sisters-in-law, three brothers- in-law, and a half-brother. VISITATION: Visitation for David G Smith will be held on Saturday, July 24, 2021 from 11:00 AM to 2:00 PM at Kurki Funeral Chapel & Crematory, 31 East Division Street, Fond du Lac. A short service, with Rev. Laura Hawkins officiating, to follow. Light refreshments will be available and masking is optional. Time will be provided if anyone would like to share a story or tell a joke in Dad’s honor. The family would like to thank everyone at Tower View Villa for providing a home away from home when Dave gave up the house. They would also like to acknowledge the exceptional care he received at St. Agnes during his illness. From the ER to the OR to the ICU, and especially the staff of 5 South, everyone he came in contact with was nothing short of amazing. Thanks for the memories, Dad. Rest now, in peace.

David G Smith, age 82 of Eldorado, Wisconsin passed away on Tuesday, July 13, 2021 at St. Agnes Hospital in Fond du Lac after a serious illness. He was born September 2, 1938 to William and Dorothy (Colton) Smith in Fond du Lac and raised on... View Obituary & Service Information

The family of David G. Smith created this Life Tributes page to make it easy to share your memories.

Send flowers to the Smith family.