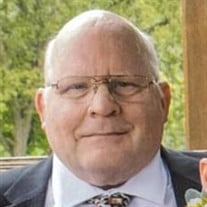 David M. Wright passed away at home Wednesday, May 6, 2020. David was born in Stoughton, WI on September 21, 1948, to Edmund and June (Joitel) Wright. His family lived in several Wisconsin towns before settling in Rosendale in 1960. He attended Rosendale High School where he was known by his friends as Wilbur. He was Most Valuable Player in Football his senior year and salutatorian of his 1966 graduating class. He attended UW-Oshkosh and then transferred to UW-Madison to earn his B.S. in Industrial Engineering. David married his wife Carol Shafer June 21, 1969, at Peace Lutheran Church in Rosendale. They moved to San Mateo, California in 1970 for his first engineering job. They later returned to Wisconsin, living in Jefferson, Lake Mills, Glendale and Janesville. While in Glendale, David earned his MBA from UW-Milwaukee. David was an independent go-getter, which led him back to the Fond du Lac area in 1977 to establish Wright Energy Systems. As the company grew and diversified the name was changed to Wrightway, Inc. where he and Carol worked together until their retirement in 2007. Although David worked hard, he felt it was important to contribute to the community. He made time to help coach his boys in basketball, football and soccer. In 1996, he was instrumental in establishing the Fond du Lac BMX Track where his sons, Mike and Matt participated. In 2002, he was instrumental in developing the Rosendale Veterans Memorial out of respect for the service of his father and all area veterans. He also enjoyed physical activity. He was a regular at the Y, playing "noon ball" for many years and exercising as his body allowed in recent years. David and Carol enjoyed many trips and have been wintering in Florida since retiring. David is survived by his wife of 50 years, Carol, three sons Andy, Mike and Matt (Holly) Wright along with three grandchildren Olive, Leaf and Hattie Wright all of Fond du Lac. He is also survived by brothers Greg (Mary Ellen) Wright of Delavan, Steve (Beth) Wright of Texas, and Kevin (Laurel) Wright of Columbus, Ohio. He is also survived by sisters Julie (Brett) Poquette and Janel (Paul) Rumbuc of Oshkosh, sister-in-law Joan Wright and brother-in-law John Macho of Oshkosh, and many nieces, nephews, relatives and friends. He was preceded in death by his parents Edmund and June Wright, sister Sonja Macho and brother Thomas Wright, niece Lisa Weaver and his in-laws: Bill and Barb Shafer. The joy of Dave's life was his three grandchildren. Olive is always busy creating something from nothing and Leaf loves to fish from grandpa's pier. He was especially happy when little Hattie visited, called him Papa and always gave him a big hug and kiss. My partner, our dad, our grandpa and papa - you will be missed by us all. We pray you're in the arms of Jesus and suffer no more. Private family services with inurnment will take place on Saturday, May 9, 2020 at Rosendale Cemetery, with Chaplain Karen Kraus officiating. A memorial in David's name is being established.

David M. Wright passed away at home Wednesday, May 6, 2020. David was born in Stoughton, WI on September 21, 1948, to Edmund and June (Joitel) Wright. His family lived in several Wisconsin towns before settling in Rosendale in 1960. He attended... View Obituary & Service Information

The family of David M. Wright created this Life Tributes page to make it easy to share your memories.

Send flowers to the Wright family.