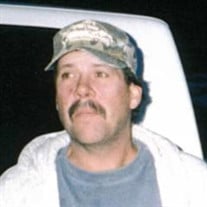 Dean “Deano” R. Oelke, 64, of Neshkoro passed away on Thursday, November 5, 2020, at Thedacare Medical Center, Neenah, after a lengthy hospitalization with various medical issues. Dean was born January 9, 1956, at St. Agnes Hospital in FDL. He was the youngest son of Donald E. and Leoba Rollman Oelke. Dean was baptized at the Church of Peace, confirmed at St. Mark’s Lutheran Church and attended various schools in Fond du Lac. Dean operated numerous machines on the Section Crew during his 33 years working for the Northwestern/Union Pacific Railroads. During those years he made many longtime friends including Steve Walters, Friendship, WI and Dwayne Jenkins, Wausau, Wi. In 1984 Dean moved to Manitowish Waters and took a few years leave of absence from the railroad to start a “crabbing” business with his friend, Tom Kramer, in the Manitowish chain of Lakes. They had great times doing this and even shipped their crabs to the New Orleans’ area when crabbing was out of season in those areas. Dean made many new friends living in Manitowish Waters, including Chuck Kremer and Art Brenner who were like brothers to him and have remained friends throughout the years. Dean always enjoyed having company visit - especially his nephew, JD and niece, Tabby. One of their favorite memories will always be when he told them they could take his boat out on the chain and they ended up getting escorted back to “Uncle Dean’s” by the local game warden. Dean continued his love of hunting and fishing with his friends and brother Guy for many years in the Manitowish Waters area. After retiring, Dean and his trusty lab, Toby, moved to Neshkoro to be closer to his older brother, Guy. As Dean’s health failed, Guy continued to assist and care for him. Dean and Guy were very close, hunting and fishing together since they were young boys with their Grandpa Paya. In these later years, Guy went to Dean’s on a daily basis even if it was just to work on crossword puzzles together. Dean, being the caring and generous person he always was, made numerous new friends in the Neshkoro area, the closest being Steve Lind and his lab, Zena. They also helped Dean with shopping and doctor’s appointments. Dean is survived by his brother, Guy (Bridget) of Neshkoro; his nephew, Jedediah (Aimee) Oelke of Appleton, their children – Eva Thomas, Kaytlyn, Madison & Jonah Oelke; his niece, Tabitha (Scott) Herbst and their daughter Peyton, Burlington, WI. He is also survived by many Oelke cousins. Dean was preceded in death by his parents Donald and Leoba Rollman Oelke ; maternal grandparents, John and Margaret Schroeder Rollman; paternal grandparents, Emil and Antonia Kries Oelke, and many Oelke relatives. Due to the current COVID precautions and Dean’s wishes, cremation has taken place. A celebration of Dean’s life will be held at a later date. Anyone wishing to make a donation in Dean’s name, please do so to the Cancer Society or your local Humane Society. The Oelke family would like to thank the Neurology, ICU and regular hospital doctors, especially Dr. Sheiff, nurses and staff for the care they provided Dean during his 5 plus weeks at Thedacare Medical Center. Kurki Funeral Chapel & Crematory is serving the family, www.kurkifuneralchapel.com. 920-921-4420

The family of Dean R. Oelke created this Life Tributes page to make it easy to share your memories.

Send flowers to the Oelke family.