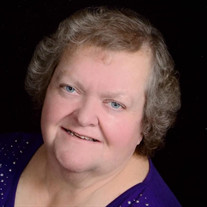 Deborah “Debbie” L. Leichtfuss, 67, of Van Dyne, passed away peacefully after a brief illness, on Thursday, December 26, 2019 at Aurora Medical Center in Oshkosh. Debbie was born on April 14, 1952, in Fond du Lac, the daughter of Laurence and Margaret Wagner Dahlke. She grew up in Eldorado, living for a short time above her father’s and uncle’s business (Dahlke Bros. Service Station) in downtown Eldorado before moving to a farm on Hwy 23. She was a member of the Busy Bees 4-H club. She attended Crescent school and graduated in 1970 from Rosendale High School. On April 3, 1971, she married Roger L. Leichtfuss at Peace Lutheran Church in Rosendale. After their marriage Debbie joined her husband in Van Dyne on the farm he was raised on, and there she spent the rest of her life working side by side with her husband, milking cows, doing chores, working the fields, raising their 3 children and teaching them the value of hard work. She also had other jobs off of the farm. She worked at Bell restaurant on Highway 41, Lone Elm Cheese Factory in Van Dyne, Steins in Oshkosh and as a school lunch server at Laconia High School. Her most recent job was as a morning prep worker at Culver’s in Oshkosh for the past 12 years. She also served as a 4-H project leader for 27 years, first in the Lucky Leaf 4-H club in Van Dyne and later in the Busy Bees 4-H club in Eldorado. She enjoyed baking, crafting, gardening, cooking, sewing and most importantly spending time with her grandchildren. She was a kind and giving person who was always there to give anyone a helping hand when they needed it. Debbie really enjoyed baking and decorating cakes. Many friends, family and neighbors were recipients of her cakes and other treats. She loved to bring a smile to people’s faces and make them feel special. She loved Christmas and would listen to Christmas music ten months out of the year, and was never afraid to invite people over for a holiday meal so they wouldn’t be alone. She is survived by her husband of 48 years, Roger Leichtfuss of Van Dyne, her three children: Michele (Brian) Westphal of Eldorado, Michael (Lisa) Leichtfuss of Van Dyne, and Mark (Vanna) Leichtfuss of Two Rivers; seven grandchildren: Marissa, Kyle and Gabrielle Westphal, Amanda Leichtfuss, Emerson, Everett and Loretta Leichtfuss and a grandchild due in March 2020. She is further survived by six brothers and sisters: Dick (Betty) Dahlke of Rosendale, Diane (Pete) Michels of Fond du Lac, Dan (Karen) Dahlke of Brandon, Susan (Dave) Hansen of Mississippi, Sandy (Jeff) Duel of Eldorado and Sheryl (Terry) Wray of Menasha; her sister in-law Bonnie (Joel) Holmes of North Fond du Lac and numerous nieces and nephews. She is preceded in death by her parents, her father and mother in-law, Lawrence & Marcella Leichtfuss and her grandson Ryan Leichtfuss. VISITATION: Friends may call on Saturday, January 4, 2020, from 10:00 – 12:00 p.m. at St. John’s Lutheran Church, Town of Nekimi, 491 Old Oregon Street Road, Oshkosh. FUNERAL: Funeral services will be held on Saturday, January 4, 2020, at 12:00 p.m. at St. John’s Lutheran Church, with Rev. James Reiff officiating. Burial to follow in St. John’s Cemetery, Town of Nekimi. Special thank you to the ICU staff, especially to Jenn, Becky, Larissa and Terri for their care and compassion shown to Debbie and family.

The family of Deborah "Debbie" L. Leichtfuss created this Life Tributes page to make it easy to share your memories.

Send flowers to the Leichtfuss family.