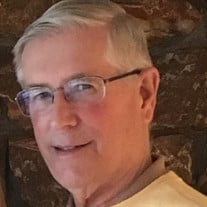 Dennis Osterholt, 77, of Fond du Lac, passed away peacefully at home surrounded by family, on Friday, February 22, 2019, maintaining his sense of humor until the very end. He was born on December 29, 1941 in Sioux Falls, South Dakota the son of Alvin E. and Eleanor Osterholt. He graduated from Platte High School in Platte, SD in 1959 and from Northern State University in Aberdeen, SD in 1963. On August 11, 1963, he married Judy I. League at the Platte Olive Presbyterian Church. They lived in Britton, SD where he taught high school social studies and coached for three years before moving to Sioux Falls, where he started as a Manager Trainee with JCPenney on June 6, 1966. Dennis was proud of his three daughters and enjoyed attending all of their music concerts and school events. His career with JCPenney brought the family to Pekin, IL and later to the Chicago area where he worked on the district staff and later as a store manager. In 1983, he was named manager of the JCPenney store in Fond du Lac, WI. After 32 years of service with Penney’s, he retired in 1997. Dennis then went on to work for the Action Advertiser as operations manager and then as General Manager of the Publications Division. He also wrote the “Bleacher Views” column until retiring in 2006. Some of Dennis’ favorite past times were attending Fondy sporting events, UW Badger football games, watching the Packers, hunting, and woodworking projects for the home and grandkids. He is survived by his wife of 55 years, Judy of Fond du Lac, his daughters: Cheryl (Stewart) Clark of San Rafael, CA, Carla (Paul) Mondi of Middleton, WI, and Cristy (Steve) Lariviere of Crestwood, KY; seven grandchildren Kendall and Ashley Clark, Michael, Jack and Brian Mondi, Justin and Lauren Lariviere; brother Dale (Karen) Osterholt of Rapid City, SD, sister-in-law Georgia Osterholt of Rapid City, SD; brothers-in-law Vernon (Janet) League of Platte, SD, Arlan (Cindy) League of Creston, IA, and sister-in-law Peggy (Ken) Brilz of Pierre, SD; and many cousins, nieces and nephews. He was preceded in death by his parents Alvin E. and Eleanor, brother, David, parents-in-law Lyle and Elva League, and brother-in-law Jerry Menning. The family would like to extend special thanks to Dr. Jones and staff at Agnesian Cancer Center, nurses from Agnesian Hospice Home of Hope, JCPenney and Action Advertiser retirees, friends and special neighbors. VISITATION: Friends may call on Friday, March 1, 2019, from 4:00 – 7:00 p.m. at Kurki-Mach Funeral Chapel & Crematory, 31 East Division Street, Fond du Lac. In lieu of flowers, memorials may be made to Agnesian Cancer Center and or Agnesian Hospice Hope. Kurki-Mach Funeral Chapel & Crematory is serving the family, www.kurkimachfuneralchapel.com. 920-921-4420

Dennis Osterholt, 77, of Fond du Lac, passed away peacefully at home surrounded by family, on Friday, February 22, 2019, maintaining his sense of humor until the very end. He was born on December 29, 1941 in Sioux Falls, South Dakota the son... View Obituary & Service Information

The family of Dennis G. Osterholt created this Life Tributes page to make it easy to share your memories.

Send flowers to the Osterholt family.