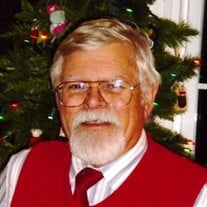 Donald “Don” F. Cooper, 86, of Glenbeulah, went to be with Jesus, on Tuesday, April 12, 2022, surrounded by his family at his residence. He was born on October 22, 1935, in Milwaukee, the son of John D. and Catherine M. Jonas Cooper. On June 8, 1957, he married Ruth V. Nienow, at David’s Star Lutheran Church in Jackson, WI. He was a member of St. Paul’s Lutheran Church, Town of Forest, where he was also a choir director for a time. He was a lay minister for a time at the Lutheran Home, Franklin House and Lincoln House. Don was a dairy farmer and also worked at Rienzi Cemetery. He was a member of the Men of Harmony, Barbershop Chorus in Plymouth, East-West Connection Quartet, Fond du Lac Community Theater, and Toastmasters. He was on the Board of Directors for AMPI. He was a co-founder of Great Northern Cattle Company. Don was an author and songwriter. He wrote books and poetry about their years of farming and God’s hand on their lives. He loved to tell others about Jesus and wrote and recorded many songs about his love for Jesus through his Farm Country Gospel Music ministry. He is survived by his wife of 64 years, Ruth Cooper of Glenbeulah, his children: Laurie (John) Schmitz of Fond du Lac, Daniel (Deanna) Cooper of St. Cloud, Cindy (Todd) Midtbo of Horicon, Jennifer (Dale) Pollnow of Cincinnati, OH, Amy (Kenneth) Evraets of St. Cloud and Chris (Lori) Cooper of St. Cloud; 16 grandchildren: Anthony, Eric, Adriana (fiancé Marty) Schmitz; Shawna, Jordan and Justin Cooper, Dana (Brennan) Higgins, Brandon (Sandrine), Samantha, Timothy, Alana (fiancé Jeff) Berthiaume, Andrew (Jenn) Evraets, Erin (Kenny) Johnson, Ryan Evraets, Lana (Cody) Wilson and Steve Cooper; his great-grandchildren: Scott -André, Christine, Lauren, Tegan, Kenny, Cooper, Jett, Brantley and Ava; his sister Patricia (Allen) Cottrell of Port Washington, WI, his sisters-in-law: Madelyn Cooper of Decatur, IL, Gwen (Fred) Haechtel of Escondido, CA and Janet Nienow of West Bend. He is preceded in death by his parents, his in-laws Henry and Clara Nienow, his brothers: Jack Cooper, Dennis C. Cooper and David A. Cooper; his brother-in law Jim Nienow and sister-in-law Eunice Nienow. VISITATION: The family will greet friends from 9:00 - 11:00 AM on Saturday, April 16, 2022, at St. Paul’s Ev. Lutheran Church, Town of Forest, W2090 Highway 23, Mount Calvary, WI. SERVICE: Funeral services will be held at 11:00 AM on Saturday, April 16, 2022, at St. Paul’s Ev. Lutheran Church, Town of Forest, with Rev. Mark Barenz officiating. Burial to follow at Rienzi Cemetery. The family would like to thank Agnesian Hospice, Hospice RN Joey, and a special thanks to Vicki Durham, Cathy Rumbuc and Jennifer Schroeder, for the care and compassion shown to Don and his family. In lieu of flowers, memorials can be made to St. Paul’s Lutheran, Town of Forest or the Winnebago Lutheran Academy Music Department.

The family of Donald "Don" F. Cooper created this Life Tributes page to make it easy to share your memories.

Send flowers to the Cooper family.