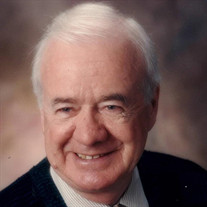 Donald J. Sears, 85, of Fond du Lac, passed away silently surrounded by his family on Wednesday, December 23, 2020 at St. Francis Home. He was born on September 16, 1935, in Hamilton, Ontario, Canada, the son of John and Hazel (Rushbrook) Sears. He was seven years old when his father, John, was killed and buried at Dieppe, France with the rest of his buddy’s – The Royal Hamilton Light Infantry. He finally got to see the grave in 2003 on a trip to France with his son Jim and Becky and his wife, Lynne. Donald graduated from Runnymede Collegiate Institute in 1953, and went on to graduate from Weston Collegiate and Vocational School in 1955. He never stopped learning his craft and especially PMA (permanent mental attitude). He has dozens of awards, diplomas and was always studying. Don also belonged to the Thistletown Fire Volunteers Brigade when the storm of the century “Hurricane Hazel” hit West Toronto on October 15, 1954. Toronto had no civil defense unit and over 78 people died in that small valley of Thistletown. On June 4, 1960, he married the love of his life, best friend and confidante, Helen “Lynne” E. (Crompton) Sears, and they were blessed with two children Susan and James. On February 1, 1967, they moved to Fond du Lac from Toronto, Ontario, Canada’s head office down to Combined Ins. Company of Wisconsin, where he served as Assistant Treasurer and Controller. Later CICA moved the business down to Chicago. Don then went to work at Vulcan Mfg Co. as controller. When they closed, he went to US West Marketing Resources Johnson Directory Division. He finished his career as controller, retiring from the FDL YMCA. During his retirement he enjoyed working for Holiday Automotive, driving the shuttle for Mazda. Don and his family proudly became US citizens in May of 1972. His most memorable trips were walking his daughter down the aisle on her wedding day, and his son going to France to find his grandfather’s grave. He found humor in everything and was a friend to everyone. His family was dear to him and he loved spending time with them. Don was a member of Noon Optimist Club of Fond du Lac, Lakeside Evening Optimist Club, Kiwanis Club of Fabulous Fond du Lac, life member of BPOE Lodge #57 FDL where he served two times Elks Exalted Ruler, Treasurer-DDGER- Wisconsin State President 1987 convention held in Atlanta, GA where he proudly carried our state Wisconsin Flag during the Parade of Flags for all states, FDL Yacht Club, FDL Eagles Aerie 270, YMCA in both Canada and Fond du Lac. He and his wife Lynne served as Water’s School PTA Presidents, United Cerebral Palsy Weekend with the Stars in Appleton and the March AAUW Book Sale. Don volunteered with Shop with a Cop, “File of Life” kits, TRIAD County President along with AARP Police and Sheriff, Maturity Times – A Tour of Ireland, Hovercraft Business Manager, AARP Member, RSI Accounting Problems for 6 years. He was honored as “Outstanding Senior Citizen” at the Fond du Lac County Fair in 2004. He enjoyed running, bowling, boating, biking, camping, travel basketball with noon YMCA’s group, and golfing. He is survived by his wife of 61 years Lynne, his daughter Susan (Jeff) Schaefer, his son Jim, his grandsons: Brandon (Roxie) Pitzen and Travis Sears; his great-granddaughters: Mykala and Zoe; his cousins in Canada: Helen (Bob) Fleury, Doreen Wilson and Doug Goss. He is preceded in death by his parents, his brother Bud and his sister Joyce, his in-laws: Bill and Mae Crompton, sister and brother-in-law: Margaret Crompton and Edward Snowdon, his brother-in-law Jim, and his aunts, uncles, cousins in Canada Joan (Norm) Maynard and Ross Baldrey. Kurki Funeral Chapel did a wonderful job caring for our family. Due to the Covid virus, private service was held. Cremation has taken place. The family wishes for everyone to remain safe, healthy and thus have made the decision to wait for Spring to celebrate his passing. We will host a reception in his honor at Rienzi Cemetery (in the Gathering Garden) on their wedding anniversary in June 2021. Details will be published. Thanks to Hospice and the people who helped advise us at St. Francis Home and Edward Jones. In lieu of flowers, and since Lynne doesn’t own a computer, cards will be welcomed, so she can read them over and over. Kurki Funeral Chapel & Crematory is serving the family, www.kurkifuneralchapel.com. 920-921-4420

Donald J. Sears, 85, of Fond du Lac, passed away silently surrounded by his family on Wednesday, December 23, 2020 at St. Francis Home. He was born on September 16, 1935, in Hamilton, Ontario, Canada, the son of John and Hazel (Rushbrook) Sears.... View Obituary & Service Information

The family of Donald J. Sears created this Life Tributes page to make it easy to share your memories.

Send flowers to the Sears family.