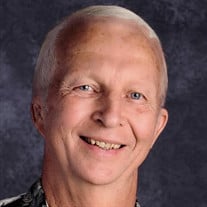 Duane H. Johnson, 67, of Burnett, Wisconsin passed away on Monday, June 17th 2019 at his residence. He was born on July 30th, 1951 to Henry Johnson and Marilyn Woessner in Freeport, Illinois. Duane attended Goodrich High School and graduated in 1969. He was married to Judith Sorenson on September 12, 1992 and was a loving husband for 20 years. He was a member of the United States Navy Seabees and was stationed in Guam. When he returned, he worked in construction as a cement finisher, which was his work for the majority of his life. For the past 6 years, Duane has been assisting his daughter, Stephanie Mason, teaching the 3rd and 4th grade classes at Sun Canyon Elementary School in Phoenix, Arizona. He enjoyed working with children, taking care of his land, wildlife, and being a handyman. He is survived by one daughter and two step-sons: Stephanie (Craig) Mason of Phoenix, AZ , Erik (Angela) Scott of Cache, OK, and Trent (Miriam) Scott of Oshkosh, WI; his grandchildren: Kenneth Scott, Jessica (Ben) Scattergood, Adam Scott, Anaïs Scott, and Violette Scott; his siblings: Larry (Sandy) Johnson of Fond du Lac, Twila Pearson of Milwaukee, Stanley (Melanie) Johnson of Fond du Lac, Lyle Johnson of Fond du Lac, special friend Virginia Johnson of Phoenix, AZ; and many more nieces, nephews, and friends. He is preceded in death by his parents, his wife Judith, on February 6, 2013, and brother, Dennis Johnson. VISITATION: Friends may call on Saturday, June 22, 2019, from 2:30-4:00 p.m. at Kurki-Mach Funeral Chapel & Crematory, 31 East Division Street, Fond du Lac. FUNERAL: Funeral services will be held on Saturday, June 22, 2019, at 4:00 p.m. at Kurki-Mach Funeral Chapel & Crematory, 31 East Division Street, Fond du Lac. Kurki-Mach Funeral Chapel & Crematory is serving the family, www.kurkimachfuneralchapel.com. 920-921-4420

The family of Duane H. Johnson created this Life Tributes page to make it easy to share your memories.

Duane H. Johnson, 67, of Burnett, Wisconsin passed away on Monday,...

Send flowers to the Johnson family.