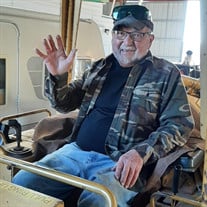 God Said, “In My Father’s house there are many mansions”…well, I guess they needed a few cabins, so he called Duane Stibb, “Pa”, from his home in St. Peter on New Years Day, 2021 at age 78. For his last three years, Duane had been working hard getting the family cabin built on "The Land" in Manchester, WI. Hand hewn beams, lumber, windows all from torn down schools, barns, buildings, etc. that he put aside, and saved for years. Lumber was from trees that had fallen on "The Land". He knew where each fell, and what kind it was. Cut and planed, they became the walls and stairs. The hand-hewn beams were placed in the ceiling like a piece of art. His lifelong profession was an Operating Engineer and was a proud member of Local 139 for fifty-five plus years. They say he could scoop up a dime off a pile of dirt, and place it in your hand. His love for this type of work began in his youth on the farm, and followed him throughout his years at Ripon High School. He worked for Ed Andrew up to, and beyond his retirement (thank you, Ed). Before Ed he worked for L&H Gyr for 28 years. Being an outdoorsman, he also tended a deer farm in his backyard for over three decades. Throughout those years, the family was blessed with being able to enjoy seeing, and caring for many fawns, bucks, and does. Pa instilled his good nature, and solid work ethic into his children, and grandchildren, whom he was so very proud. This was his life, and he will be greatly missed by many. He is survived by his wife of 59 years, Mary (Lemke). Two sons, Mike (fiancée Debbie), and Tom (Carol). Two daughters, Kelly (Tom) Peachy, and Jessy (Carl) Wagner. Seven grandchildren: Michael (Trina) Peachy, Anna (Allen) Floeter, Jane (Eric) Rebedew, Ozzie, Solomon, Henry and Cecilia Wagner; five great grandchildren: Aleita, Owen, Katie, Eddie and Frankie. Five siblings, Delores Pierson, Lee (Joan) Stibb, LuAnn Stibb, Sharolyn (Don) Polege, and Daryl "Butch" (Carol) Stibb. Two brothers-in-law, Mike (Donna) Lemke, and Rollie (Cindy) Lemke. He was preceded in death by his parents Dora and Lawrence Stibb, his mother and father-in-law Frances and Roland "Mike" Lemke, two brothers-in-law, Dick and Fritz Lemke, and one sister-in-law, Judy Wilson. VISITATION: Friends may call from 9:00 – 11:00 AM on Saturday, January 9, 2021 at St. Peter’s Church of Holy Family Parish, N8079 Church Road, Malone 53049. SERVICE: A Mass of Christian Burial will be held at 11:00 AM on Saturday, January 9, 2021 at St. Peter’s Church in St. Peter. Burial to follow at St. Peter’s Cemetery in St. Peter.

The family of Duane W. Stibb created this Life Tributes page to make it easy to share your memories.

God Said, “In My Father’s house there are many mansions”…well,...

Send flowers to the Stibb family.