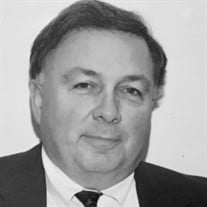 Edward P. Sadler Jr., 76, died August 24, 2019, after a long struggle with multiple health issues. He was born February 26, 1943 in Exeter, NH, the son of Edward and Gladys (Flanagan) Sadler. On May 24, 1981, he married Carol Bowditch in Hampton, NH where they resided until moving to Deerfield, NH, Spring Lake, MI, Grand Haven, MI and ultimately to Fond du Lac, WI. After graduation in 1961 from Winnacunnet High School, Hampton, NH, Ed was employed by St. Johnsbury, VT Trucking Co. as a driver and safety inspector. He also served as a police officer and owned an electric company in Hampton, NH, followed by employment at Hampton Machine Co. where his machine designs were heralded in 1980 at a press conference in Gloversville, NY where he was introduced as “the man who single-handedly brought the leather industry out of the Dark Ages and into the 20th century”. Ed was also employed by Dake Corp. in Grand Haven, MI where he served as VP of Engineering before being promoted to VP of Operations and eventually President. He and Carol then moved to Fond du Lac, WI where he was President and eventual owner of Exeter Machine Co. in Lomira. In his younger days, Ed was an avid sailor and race car enthusiast. He built engines for and raced Supermodifieds, setting a speed record at the Thompson, CT racetrack that wasn’t broken for 25 years. Ed was active in the United Methodist Churches in NH, MI and WI, serving on various committees. He is survived by his wife of 38 years, Carol; son Edward P. Sadler III (Susie) of Singapore; son Kevin (Jaye) of FL; daughter Rebecca (Bob) of NH; step-daughter Laurie (Mark) of NH; step-son Scott of HI; sister-in-law Barbara (Bob) of MA, 12 grandchildren and 3 great grandchildren. He was predeceased in death by his brother Donald (Toni) and his sister Patricia, both of FL. FUNERAL: A service of Celebration will be held on Saturday, September 21, 2019, 1:00 pm at Covenant United Methodist Church, 20 N. Marr St., Fond du Lac, WI 54935, followed by a gathering of family and friends in Fellowship Hall with beverages and a dessert buffet being served. In lieu of flowers, donations can be made in Ed’s memory to Covenant United Methodist Church.

The family of Edward P. Sadler Jr. created this Life Tributes page to make it easy to share your memories.

Send flowers to the Sadler family.