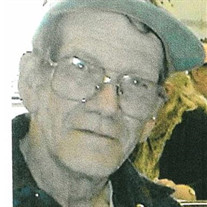 Gene E. McEathron, 77, of Fond du Lac, passed away on Friday, August 30, 2019 at his residence. He was born on August 2, 1942, in Ladysmith, the son of Donald and Etta Meider McEathron. On November 9, 1974, he married Marie A. Balson, in Fond du Lac. Gene owned and operated a Shell Gas Station in Fond du Lac. He worked for Chrysler Motors in Hartford, and he later worked for Saputo Cheese Company in Fond du Lac. He enjoyed playing cribbage and was proud of his “29” hand he had. Gene also enjoyed going fishing and hunting. He is survived by his wife, Marie McEathron, his four children: Norman (Linda) McEathron and their daughter Ashley of Glenbeulah, Mark McEathron of Ladysmith, Paul (Jan) McEathron of Ladysmith and John McEathron of North Fond du Lac, four grandchildren, his brother Richard (Debbie) McEathron of Mondovi and his brother-in-law George LaBar of Dresden, ME. He is preceded in death by his parents, his daughter-in-law Rose, his twin sister Joan LaBar and an infant sister Ann. VISITATION: Friends may call on Sunday, September 15, 2019, from 12:00 - 2:00 p.m. at Covenant United Methodist Church, 20 North Marr Street, Fond du Lac. FUNERAL: Memorial services will be held on Sunday, September 15, 2019, at 2:00 p.m. at Covenant United Methodist Church, with Rev. Mary Balson officiating. Cremation has taken place.

The family of Gene E. McEathron created this Life Tributes page to make it easy to share your memories.

Send flowers to the McEathron family.