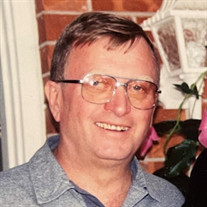 George E. Paquin Jr., 79, of West Bend, died on Sunday, January 30, 2022, at the Samaritan Health Center in West Bend. He was born on September 8, 1942, in Fond du Lac, the son of George E. and Grace L. Hicken Paquin. He was a veteran of the United States Air Force, serving during the Bay of Pigs. He married Carol Mangan on June 9, 1962. George worked as a machinist for Giddings & Lewis and later with A.O. Smith. He enjoyed cars and volunteered at the car museum in Hartford. George had many interests which included motorcycles, collecting treasures of all kinds. Among the things he loved were cars and country music. He loved all sports, especially baseball and bowling. He is survived by his children: Sherry (David) Boinski of West Allis, Kimberly (Eric) Kulju of New Berlin and Patrick (Diana) Paquin of West Bend; his grandchildren: Austin (Cassidy) Boinski, Keenan Kulju, Sullivan Kulju, Tierney Kulju, Sean Paquin, Caroline Paquin and Lauren Paquin; two great-grandchildren: Emery and Henry; his brother Bill (Helen) Paquin of Fond du Lac, his niece, nephews and friends. He is preceded in death by his parents. George was a man who liked the simple pleasures of life like root beer and banana popsicles. Telling tales from his love of trivia and history. We will carry him in our hearts forever. VISITATION: The family will greet guests from 10:00 - 11:30 AM on Friday, February 4, 2022, at Kurki Funeral Chapel & Crematory, 31 East Division Street, Fond du Lac. SERVICE: Funeral services will be held at 11:30 AM on Friday, February 4, 2022, at Kurki Funeral Chapel & Crematory. Burial to follow at Calvary Cemetery. In lieu of flowers, memorials appreciated to the American Diabetes Association. Kurki Funeral Chapel & Crematory is serving the family, on-line guestbook can be found at www.kurkifuneralchapel.com. 920-921-4420

The family of George E. Paquin Jr. created this Life Tributes page to make it easy to share your memories.

Send flowers to the Paquin family.