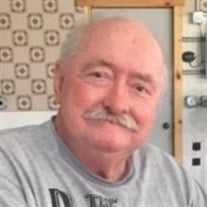 George Weigel,78, died on Easter Sunday, April 12,2020 at home with his wife. He passed away from Multiple Myeloma, which he was diagnosed with in 2009. George was born on March 10,1942 in Plymouth, Wisconsin to the late William and Ruby (Grebe) Weigel, the eldest of three sons. George graduated from L.P. Goodrich High School, Class of 1960. Following graduation, he proudly served with the United States Marine Corps. He married Diane Berens, and they celebrated 41 years of marriage in March. George was employed at Mercury Marine for over 38 years. George loved to make people laugh as his clown character "Mo." He clowned for many events in the area and beyond. George was also a Shrine Clown. George was very involved in several churches over the years. He was active as a Deacon, clown ministry, puppet ministry, drama, choir, handbells and teaching Sunday school. He had a deep faith. George co-founded the Marine Corps League McCullen-Kimpel Detachment #552, the East Central Wisconsin Beekeepers Association, All Most Live Puppets, and the Du Lac Comedy Players. He was a member of Fond du Lac Lodge #26 Free and Accepted Mason's, and had served as Master as well as other offices. George enjoyed volunteering for many organizations including Agnesian Healthcare, Broken Bread, Headstart as “Grandpa George,” the United Singers and others. George was also involved over the years with the Fond du Lac Community Theater, Fond du Lac Evening Optimists, South Shore Chorale and others. In addition to his parents, he was predeceased by a son in law, Frank Hass, and a brother in law Oscar T Foote. Surviving are his beloved wife, Diane. Five children, Angela Orvis and her husband Scott, Justin Berens, John Weigel and his wife Tanya, Tamara Hass, and Michelle Perronne and her husband Brent. Daughter in law Kathy Berens. Eight grand-children, Alexia, Frankie, Logan, Sophia, Olivia, Cody, Erik and his wife Tina and Devin. Two brothers, Norman (Vicki) Weigel and Delbert (Deb) Weigel, and his faithful dog, Kadee. Brothers in law Phil (Jean) Foote, Herb (Sandy Drexel) Foote, Roger Foote, and Donald (Greta) Foote. Many nieces, nephews, other relatives and friends. Due to the current restrictions surrounding COVID-19, cremation has taken place. VISITATION: Friday, August 14, 2020 from 9:00 - 11:00 AM at the park in Rosendale across from High School. SERVICE: Friday, August 14, 2020, at 11:30 AM at the park in Rosendale. Many thanks to Dr. Hari and staff of Froedtert Hospital, Dr. Thomas Klinkhammer and staff, Agnesian/SSM Hospice and so many others. A memorial will be established. A Life Well Lived...A Heart Well Loved. Kurki Funeral Chapel & Crematory is serving the family, www.kurkifuneralchapel.com. 920-921-4420

George Weigel,78, died on Easter Sunday, April 12,2020 at home with his wife. He passed away from Multiple Myeloma, which he was diagnosed with in 2009. George was born on March 10,1942 in Plymouth, Wisconsin to the late William and Ruby (Grebe)... View Obituary & Service Information

The family of George Weigel created this Life Tributes page to make it easy to share your memories.

Send flowers to the Weigel family.