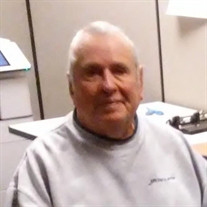 Gerald “Jerry” J. Steffes, 84, of Fond du Lac, passed away in his sleep on Saturday, June 26, 2021, at his residence. He was born on July 12, 1936, in Fond du Lac, the son of Edward W. and Jeannette O. Rasmussen Steffes. He graduated from Fond du Lac Senior High School, Class of 1955. He was a veteran of the United States Army, later serving in the Army Reserves. On September 21, 1975, he married Gayle L. Scheibach at Immanuel-Trinity Lutheran Church. Jerry worked for Manowske Welding and Fire Extinguishers, International Paper, and later at Ray E. Wood’s delivering flowers. He enjoyed 49 years of Monday Night Industrial Bowling League at Karl Ray. He played golf for the Eagles, and spent his time fishing, camping and deer hunting in Florence County. He was a member of the Eagle Anglers Club, and has been a member of Eagles Aerie No. 270 since 1974. He is survived by his loving wife of 45 years, Gayle L. Steffes, his sisters: Betty Koll, Shirley Schneider and Marian (Don) Bestor; his sisters-in-law: Jewel (Mike) Tolvstad and Marci (Wes) Jahns; and many nieces and nephews. He is preceded in death by his parents, his in-laws Fredrick and Dorothy Scheibach, his brother Donald (Marge) Steffes and his brothers-in-law: Eugene Schneider and Joseph Koll. VISITATION: Friends may call from 11:00 – 12:00 PM on Tuesday, June 29, 2021, at Kurki Funeral Chapel & Crematory, 31 E. Division St., Fond du Lac. SERVICE: Funeral services will be held at 12:00 PM on Tuesday, June 29, 2021, at Kurki Funeral Chapel & Crematory. Burial to take place at St. Charles Cemetery.

The family of Gerald "Jerry" J. Steffes created this Life Tributes page to make it easy to share your memories.

Send flowers to the Steffes family.