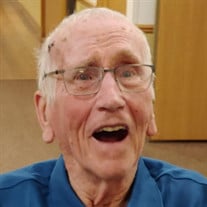 Gilbert Henry “Gib” Lepien died at his residence, Adelaide Place Assisted Living, Fond du Lac on Monday October 19, 2020 at age 97. He was born on October 1, 1923 in the Township of Rubicon in Dodge County and grew up on the family farm there. He graduated from Hartford Union High School in 1941, attended University of Wisconsin, and served in the Army Infantry before entering the plumbing and heating trade. He was Wisconsin’s Plumbing Apprentice of the Year in 1957. In 1949 he married Loraine Florence Mueller in Wauwatosa, and the couple celebrated their 70th wedding anniversary on June 30, 2019. Gilbert was a plumbing and heating contractor and third generation owner of the family business, Fenner Plumbing & Heating, prior to their retirement in Florida. The couple enjoyed traveling together and returned to Fond du Lac later in their retirement years. He was actively involved in many ministries at Church of Our Saviour ELCA in Fond du Lac during all their years in the area. Gilbert was a founding member of the Hartford FFA and a lifelong member of Fond du Lac Masonic Lodge #26, serving as chaplain for many years. He is survived by a sister Shirley (Loren) King; five children: Janet (Jeff) Huenink, Claire (Brian) Koehler, John (Linda) Lepien, Ruth (Dan) Muller, and Nancy (Todd) Kaphaem; twelve grandchildren, and nine great-grandchildren. Gilbert was preceded in death by his parents, Henry and Irene (Fenner) Lepien; his wife, Loraine; two sisters, Barbara Mickelson and Joan Rogge; a brother, Robert Lepien; and a son, Robert Henry Lepien. Cremation has taken place, with a memorial service for family at 1 p.m. on Sunday November 1, 2020 at Church of Our Saviour, 363 South Main St., Fond du Lac. No visitation is planned at this time. Gilbert will be interred at Arlington Cemetery in Milwaukee, Wisconsin beside his wife. In lieu of flowers, the family requests that memorials be directed to Church of Our Saviour ELCA, 363 South Main Street, Fond du Lac, Wisconsin 54935 or Faith Lutheran Church, 705 Leeland Heights Blvd. E, Lehigh Acres, Florida 33936.

Gilbert Henry &#8220;Gib&#8221; Lepien died at his residence, Adelaide Place Assisted Living, Fond du Lac on Monday October 19, 2020 at age 97. He was born on October 1, 1923 in the Township of Rubicon in Dodge County and grew up on the family... View Obituary & Service Information

The family of Gilbert "Gib" H. Lepien created this Life Tributes page to make it easy to share your memories.

Send flowers to the Lepien family.