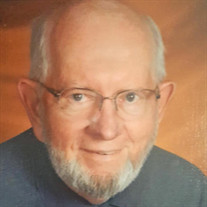 Gordon A. Abrahamson, of Fond du Lac, WI, age 87, passed away peacefully on September 13, 2020 after a lengthy illness. He was born on May 12, 1933, at Egg Harbor, Wisconsin, to Rose and Gust Abrahamson. Upon the death of his father in 1946, the family moved to Sturgeon Bay, WI, where he graduated from Sturgeon Bay High School in 1951. Gordon served in the U. S. Army. Upon discharge he went on to study Correctional Administration and received a Master’s Degree in Social Work. He began his career in Corrections in 1959 starting as a parole officer and ending his career in 1996 as the Warden of Dodge Correctional Institution in Waupun. Gordon married Aleene Francis on September 5, 1959 in Minnesota. They have three children, Wendy Rashid of Estes Park, Colorado; Sheri Powelson (Jeff) of Sparta, Wisconsin; and Todd Abrahamson (Kathy) of West LaFayette, Indiana. Gordon is survived by his wife and children, as well as ten grandchildren and seventeen great-grandchildren. He was preceded in death by his mother Rose and father Gust, brother Gustav Abrahamson and a sister Ruth Schultz. Gordon had a life-long interest in singing in the church choir and a barbershop quartet. He loved to travel with his wife, children and grand-children, taking them each on a trip when they were old enough. The family would like to thank Dr. Kumar, the staff at Woodlands Senior Park, and Agnesian Hospice Hope for their wonderful care, Kurki Funeral Chapel, and Immanuel Trinity Church. A private family service was held on Wednesday, September 16, at Immanuel Trinity Lutheran Church. Condolences can be sent in care of Kurki Funeral Chapel. Memorial contributions can be sent to Immanuel Lutheran Church, 20 Wisconsin-American Dr. Fond du Lac, WI 54935.

Gordon A. Abrahamson, of Fond du Lac, WI, age 87, passed away peacefully on September 13, 2020 after a lengthy illness. He was born on May 12, 1933, at Egg Harbor, Wisconsin, to Rose and Gust Abrahamson. Upon the death of his father in 1946,... View Obituary & Service Information

The family of Gordon A. Abrahamson created this Life Tributes page to make it easy to share your memories.

Send flowers to the Abrahamson family.