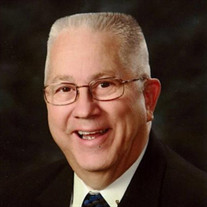 GORDON W. WOLFE, born September 4, 1942 in Dallas, Texas. Died August 23. 2021 in Fond du Lac, Wisconsin. Gordon is survived by his beloved wife of 56 years, Carol Sue Wolfe. A Daughter Kristine Wolfe Morris & her husband Kent Morris of Rockville, MD. A Son Kenneth G. Wolfe & his wife Jennifer Darner Wolfe as well as two Granddaughters Frances Wolfe & Marjorie Wolfe of Mayville, WI. He is also survived by his sister Karin Wolfe of Stamford, NY. Born in Dallas, he grew up in New Jersey and graduated from Glen Ridge High School in 1960. He always loved everything about electronics & audio. At the age of 16 he sold & installed a complete sound system at the Orange, NJ, YWCA. His dream was to, someday, own his own business. After working for a year following high school, he decided it was a good idea to go to college if he ever wanted his own business. Therefore, he enrolled in Hartwick College in Oneonta, NY as a member of the Class of 1965. Every summer he worked at ABC television in NY to earn tuition money. In 1964/1965, he took a little more time off from school. That is when he met & married Carol Sue. Then they both headed up to Hartwick where he graduated in 1966. After graduation they went back to NJ where he had a job in NYC. as a Sales Engineer. His proudest achievement in NY was designing and selling the very first 911system to the NY Police Dept. installed at One Police Plaza. In 1973 he moved his family, which now included Kristine & Kenneth to Northridge, CA where they lived for 48 years. He worked as a Sales Engineer, then Director of Engineering. He enjoyed traveling the world with all his jobs. He went to Tokyo; Hong Kong; Singapore; Panama; Jeddah, Saudi Arabia; and Doha, Qatar. By 1979 he decided it was time to start his own, very successful, business which he named KRISKEN ELECTRONICS CORP. He owned and operated Krisken with Carol Sue for 35 years. He designed and installed the Trading Floors in most of the Banks and Brokerage houses in downtown Los Angeles. His customers loved him and his devoted employees because they could fix anything. He had a very special team of people. His other love was Dixieland Jazz. Every year he did the sound for the Sweet & Hot Music Festival at the LAX Marriott hotel. Also, he went to Festivals all over the country and helped with their sound. It was a lot of fun and he loved every minute of it. Recently he decided to move to Fond du Lac, Wisconsin to be closer to his son, daughter in law and grandchildren. Services were private. Kurki Funeral Chapel & Crematory is serving the family, www.kurkifuneralchapel.com. 920-921-4420

The family of Gordon W. Wolfe created this Life Tributes page to make it easy to share your memories.

Send flowers to the Wolfe family.