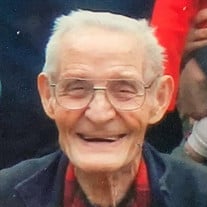 Heinz H. Zimmermann, passed peacefully into the arms of his Savior, on November 11, 2021, Veteran’s Day, at Hospice Home of Hope. He was born in Harnau, West Prussia, Germany on November 7, 1930 to Eduard and Martha (Hartkopf) Zimmermann. At the age of 14, in January 1945, his family fled their village as the German and Russian armies advanced. The first night, it was minus 47 degrees and many froze to death. They were on the road in horse drawn wagons for three months, navigating road blocks and sometimes dodging air attacks and enemy soldiers. His family, along with his future wife’s family, eventually settled in the northwest of Germany near Bremen. His father never returned from the war, leaving his mother with five children. In 1951, at the age of 20, Heinz came to Fond du Lac, sponsored by his Uncle Gustav Hartkopf. He had $25 dollars in his pocket. His first job was at the Northern Casket Company. In 1953, he joined the US Army. He married Irmgard Siebert in Germany on June 5, 1955. They returned to Fond du Lac where Heinz was proud to buy a home for his family. Heinz worked for the US Postal Service for over 30 years. He served in the US Army for 36 years, attaining the esteemed rank of Sergeant Major. The holder of this rank is the most senior enlisted member of the Army. He was very proud of his service to his country and was a true patriot. It is fitting that he left this earthly life on Veteran’s Day. Heinz was known to be a hard worker and had many varied handyman skills. He often helped his friends with home and car maintenance and providing transportation. We joked that his car doors should say “Heinz’s Handyman and Transportation Service.” He will be lovingly remembered by his daughter Sigrid (John) Holman of Fond du Lac. He was loving Opa to grandsons Erik (Vasilena) Holman of Milwaukee, Blake (Anna-Michelle) Holman of South Bend, Ind, granddaughters Amy (Matt) Baumhardt of Fond du Lac, Jenny (Chris) Svehlek of Prairie Village, KS; four great grandchildren and another great grandson arriving any day. He is also survived by his sister Irmtraut (Kurt) Lange and brother Ernst (Anneliese) Zimmermann and many nieces and nephews in Germany. He was preceded in death by his parents, his wife Irmgard in 2004, his son Rolf in 2008, his brother Siegfried and sister Ingrid. VISITATION: Friends may call from 9:30 – 11:00 AM, on Tuesday, November 16, 2021 at Kurki Funeral Chapel, 31 East Division Street, Fond du Lac. SERVICE: Funeral Services will be held at 11:00 AM, on Tuesday, November 16, 2021 at Kurki Funeral Chapel with Rev. Phillip Enderle officiating. Burial will follow at Ledgeview Memorial Park. Trier-Puddy American Legion Post #75 will conduct Military Graveside Services. In Lieu of flowers, memorials appreciated to Hope Lutheran Church or Hospice Home of Hope. Heinz had a strong faith and often commented on how the Lord had watched over him his entire life. He was a long-time member of Hope Lutheran Church. Derr Herr is meine Stärke und mein Schild, auf Ihn hofft mein Herz, und mir ist geholfen. Psalm 28:7

Heinz H. Zimmermann, passed peacefully into the arms of his Savior, on November 11, 2021, Veteran&#8217;s Day, at Hospice Home of Hope. He was born in Harnau, West Prussia, Germany on November 7, 1930 to Eduard and Martha (Hartkopf) Zimmermann.... View Obituary & Service Information

The family of Heinz H. Zimmermann created this Life Tributes page to make it easy to share your memories.

Heinz H. Zimmermann, passed peacefully into the arms of his Savior,...

Send flowers to the Zimmermann family.