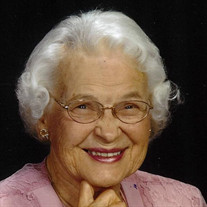 Hermine E. Fritz was born February 24, 1921, in the town of Marathon, Marathon County, Wisconsin, the youngest of 14 children born to Emil and Helen (Kaatz) Kolbe, 12 of whom lived to adulthood. Hermine became a child of God by the washing of Holy Baptism on March 1 of the same year. She pledged her lifelong faithfulness to Jesus by the rite of confirmation on September 3, 1933 at Bethlehem Lutheran Church, town of Rib Mountain. Hermine was united in holy matrimony with Lester N. Fritz on December 25, 1940 at Trinity Lutheran Church in Wausau, WI. Their union was blessed with three children. Their marriage ended in divorce in 1967. Following her childhood on a farm “in the shadow of Rib Mountain”, as she would say, Hermine lived for considerable periods of time in the Milwaukee area, Jackson and West Bend, finally moving to Fond du Lac in 2009 to be near family as age took a toll on her memory. Hermine departed this life in the early morning hours of January 25 at her residence at Artisan Memory Care in Fond du Lac, following a hip injury sustained on January 10. She is survived by two sons, Dennis (Sue) of Lake Havasu City, AZ and the Rev. Lester G. (Eunice) of Oshkosh, WI; two grandchildren; two great-grandchildren; four step-grandchildren; ten step great-grandchildren; six step-great-great grandchildren; and numerous nieces and nephews. Hermine was preceded in death by her ex-husband, Lester; a daughter and son-in-law, Helen and Robert Arndt; a daughter-in-law Nancy, née Congemi; all her siblings and their respective spouses; and numerous nieces and nephews. Private burial beside her daughter Helen and daughter-in-law Nancy will take place at a later date at Zion Lutheran Cemetery in the town of Black Wolf, where her mortal remains will await the resurrection of all flesh on the Last Day. Special thanks to the caring staff at Artisan Memory Care of Fond du Lac for the loving attention shown to Hermine during her more than five-year stay, and to Agnesian Hospice Hope. Thanks also to Kurki-Mach Funeral Chapel & Crematory of Fond du Lac for their friendly and knowledgeable assistance. Any memorials may be directed to Bethlehem Lutheran Church of Oshkosh.

Hermine E. Fritz was born February 24, 1921, in the town of Marathon, Marathon County, Wisconsin, the youngest of 14 children born to Emil and Helen (Kaatz) Kolbe, 12 of whom lived to adulthood. Hermine became a child of God by the washing... View Obituary & Service Information

The family of Hermine Fritz created this Life Tributes page to make it easy to share your memories.