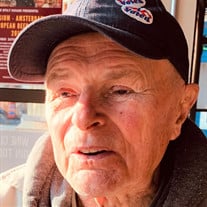 Imants Strautmanis, 95, formerly of Fond du Lac, passed away peacefully at his home in Cedarburg on Friday, June 19, 2020, with his son, Sigurd, and his daughter, Rasma, at his side. With the exception of the last paragraph, this obituary was written by Imants. Imants was born on January 28, 1925, in Latvia, a small country in northeastern Europe. He graduated from Rīgas Valsts tehnikums (Riga technical high school) in Riga, Latvia in 1944. Toward the end of World War II, in order to escape the Russian Communist occupation of Eastern Europe, including Latvia, the Strautmanis family, which included Imants, his parents, his youngest brother and his two sisters, fled to West Germany until the end of the war. After the war, unwilling to return to Latvia, for it was still occupied by Russians, the family settled in a refugee camp in West Germany. While in the refugee camp, Imants and his family were seeking a sponsor in America so that they could immigrate. Their opportunity came in Reverend Theodore Jordan from Ripon, Wisconsin, who generously sponsored them. The whole Strautmanis family immigrated in 1950 to the United States and became citizens in 1953. The family then settled, first in Ripon, then later in Fond du Lac, Wisconsin. Imants found employment in the Kiekhaefer Mercury, now Mercury Marine, machine shop. While he was there, he took a correspondence course in mechanical drafting from the Chicago Technical Institute. After graduating, he was employed for 11 years by Rockwell Axle and Transmission Company in Oshkosh, Wisconsin. After that, Imants was employed by Mercury Marine for 25 years until his retirement. In 1957 Imants married Irena Zalevits. They had five children, Rasma, Lauris, Maris, Rita and Sigurd. Imants had a lifelong passion for protecting wildlife and the environment. He enjoyed camping, hiking and cross-country skiing with his family in National and State Parks. He also enjoyed swimming, bicycling and running. His hobbies included oil painting, computer art and photography. In his childhood, Imants enjoyed boy scouting, until Russian Communists forbade it. After the war, Imants helped organize a boy scout troop in his refugee camp in West Germany and was active as a leader in it. Later, in the United States, Imants was an active leader in the Milwaukee Latvian boy scout troop as well as a cub scout den leader in Fond du Lac for many years. In later years, Imants was the Chairman of Martin Luther Latvian Church in Fond du Lac. Imants is survived by his daughter Rasma (Robert) Barbee, son Sigurd Strautmanis, daughter-in-law Thomasina Ringler and his seven wonderful grandchildren, Henry and Max Barbee, Helena and Sven Marnauzs, Uve and Anna Strautmanis and Lauris Strautmanis. He was preceded in death by his wife Irena, sons Lauris and Maris, daughter Rita and daughter-in-law Alisa. Per Imants directive, a private graveside service will be held with immediate family pursuant to Andrew Cuomo’s COVID-19 funeral guidelines, which he supported and agreed with. A celebration of Imants’ life will be held in June 2021. In lieu of flowers, Imants asked that donations be made to the National Park Foundation, supporting the National Parks he so loved.

Imants Strautmanis, 95, formerly of Fond du Lac, passed away peacefully at his home in Cedarburg on Friday, June 19, 2020, with his son, Sigurd, and his daughter, Rasma, at his side. With the exception of the last paragraph, this obituary was... View Obituary & Service Information

The family of Imants Strautmanis created this Life Tributes page to make it easy to share your memories.

Send flowers to the Strautmanis family.