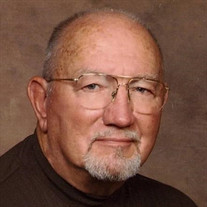 James N. Acheson, 82, died August 14, 2019, at Hospice Home of Hope in Fond du Lac. He was born on January 12, 1937, in Milwaukee, a son of Robert and Henrietta Roepke Acheson. On September 27, 1958, he married Theresa Joanne Stevens. They were married for 60 years at the time of his death. Mr. Acheson was an Engineering Technician for 30 years at Mercury Marine in Fond du Lac. Previous to moving to Fond du Lac, he was employed at Line Material in South Milwaukee. Jim was a car enthusiast and attended many car shows with his truck he built and named the "Onion". He was also an avid fan of his children's and grandchildren's sports activities. As a hobby, Jim also used his innate imagination to create many metal sculptures out of rusty old tools and scrap metal. Survivors include his wife; (Theresa) Joanne, three sons, Steven J. (Kelly) of Menasha, Scott N. (Jackie) of West Bend, Matthew G. (Megan) of Fond du Lac and four daughters, Pamela J. Davies (Jim) of San Diego, CA, Jill A. Acheson of Waupun, WI, Candace K. Zimmer (Mike) of Appleton, WI, Theresa A. Woodruff (Rich) of Fond du Lac. Mr. Acheson also has a surviving sister Barbara A. Jones of Longwood, FL; 17 grandchildren, 6 great-grandchildren, and his cat Mindy. He was preceded in death by his parents, his brother Robert C. Acheson; one grandson, Anthony Acheson, and; one grandson-in-law, Nick Klotz. At Mr. Acheson's request, no services will be held.

The family of James N. Acheson created this Life Tributes page to make it easy to share your memories.

Send flowers to the Acheson family.