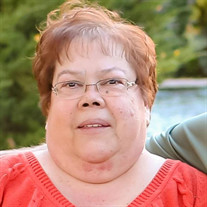 Jean "Jeannie" Marie Gudex, 66, passed away peacefully on January 11, 2021 at St. Agnes Hospital surrounded by her loving family. She was born on May 30, 1954 in Fond du Lac to Terry and Geraldine Gaffney. Jeannie graduated from St. Mary Springs High School in 1972. She married the love of her life, Leonard “Lenny” Gudex on May 25, 1974. They were married 46 years and would have celebrated their 47th anniversary this year. Jeannie worked in healthcare for nearly 25 years, with the duration of her career at All About Life or Crossroads in Fond du Lac. She raised three healthy boys who were active in sports and kept her on her toes. There have been known to be a couple of incidents over the years that could have given her a few gray hairs. As one can imagine, there are many stories. Jeannie was also a Mom to many of the boy’s friends, most of whom called her “Mama Gudex”. It was always an open-door policy at the Gudex home. Having a houseful of boys, Jeannie often enjoyed spending time with her daughter-in-laws and tended to even side with them on occasion. After retiring, Jeannie enjoyed traveling to Michigan with Lenny to take in the beautiful fall colors and being “Nana”, spoiling her grandkids. Family was the center of Jeannie’s life. She would often say “there is nothing more important than family” and truly was the protector. Jeannie enjoyed spending time with her grandchildren, family, and friends. COVID made this difficult, but she was able to spend time virtually with them. Most of you who know Jeannie, would know she was the life of the party. She had soul and even a little sass. It was not unusual for Jeannie to grab a microphone and sing “Proud Mary”. Yes, even Tina Turner style. For those familiar, you could almost set the time during the night when this would happen. She had the warmest heart and spirituality was also important to her. To say she will be missed is an understatement. There are many heavy hearts. Heaven gained a very special angel. Jeannie is survived by her husband Leonard Gudex of Fond du Lac. Three sons: David (Samantha) Gudex; Jeffrey (Brenda) Gudex all from Fond du Lac; Craig (Amanda) Gudex from Naperville, Illinois; six grandchildren from oldest to youngest: Connor, Clara, Griffin, Livvy, Ava, and most recently Landon. Sadly, Jeannie did not get to meet Landon in person, but was able to see him through virtual means. She is also survived by her Stepmother Sue; Stepbrother Erik; Stepsister Michelle, and many brother-in-laws, sister-in-laws, nieces and nephews. Jeannie is preceded in death by her Father Terry, Mother Geraldine, Stepfather Merle Kiesner, one brother-in-law and three sister-in-laws. There will be no funeral service per Jeannie’s wishes. Family will be coordinating a celebration of life, date to be determined. Our family would like to thank the caregivers at Crossroads Nursing Home who cared for Jeannie this past year. We would also like to thank the staff from 4th and 5th floors along with Emergency Room staff from St. Agnes Hospital. This includes physicians, nurses, caregivers and anyone else on Jeannie’s care team. We truly appreciate the care and compassion she received this past year especially.

Jean "Jeannie" Marie Gudex, 66, passed away peacefully on January 11, 2021 at St. Agnes Hospital surrounded by her loving family. She was born on May 30, 1954 in Fond du Lac to Terry and Geraldine Gaffney. Jeannie graduated from St. Mary Springs... View Obituary & Service Information

The family of Jean M. Gudex created this Life Tributes page to make it easy to share your memories.

Send flowers to the Gudex family.