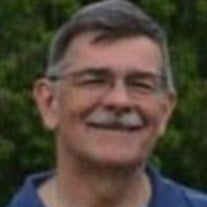 Jeffrey “Jeff” Gerald Steward, 63, passed away at Edenbrook Nursing Home of Fond du Lac, Wisconsin on Saturday, August 15, 2020 after a sudden heart attack. He peacefully went home to his Lord where he had longed to meet Jesus and reunite with loved ones. Jeff was born on July 6, 1957 in Appleton. He was a man of strong faith and had a way of touching perfect strangers and leaving a lasting and loving impression. Jeff was known for his occasional eloquent bible readings at Saint Mary’s Catholic Church in Appleton. After graduation in Clintonville in 1975 he proceeded to Waukesha where he earned his Bachelor's in Secondary Degree in Speech/English. He attended the University of Wisconsin-Madison (Go Badgers!), in Counselor Education, in 1987. He taught English at Deforest High School in Wisconsin from 1979-1998. His hobbies were football, baseball, golfing and any good game of cards or cribbage. Jeff always had a keen interest in the most challenging crosswords he could find. Jeff is survived by his daughter Jessica Barrett (Matt) of Verona, WI and his son Derek Steward, of Rosemount, MN. Jeff’s memory survives with his two children and their mother, Karen Steward. He is additionally survived by his father, Robert “Bob” Steward, sisters Lori Wilke (Mike) Appleton, Lisa Gergen (Stan) of Springfield, NJ, Doreen Merryfield, Appleton and his brother, Joel, of Green Bay. Jeff was preceded in death by his mother, Marilyn “Molly” Steward Zemlock, Appleton. Cremation for Jeff was handled by Kurki Funeral Chapel & Crematory on Thursday, August 20th. Inurnment will be determined at a later date at Bovina Cemetery in Shiocton. The family would like to extend a special thank you to his friends at Edenbrook Nursing Home for his caregiving, companionship, and support.

Jeffrey &#8220;Jeff&#8221; Gerald Steward, 63, passed away at Edenbrook Nursing Home of Fond du Lac, Wisconsin on Saturday, August 15, 2020 after a sudden heart attack. He peacefully went home to his Lord where he had longed to meet Jesus and... View Obituary & Service Information

The family of Jeffrey "Jeff" G. Steward created this Life Tributes page to make it easy to share your memories.

Send flowers to the Steward family.