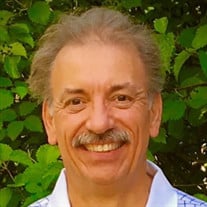 Jeffrey J. Julka, 64, of Fond du Lac, died on September 30, 2021, surrounded by family after a long journey with Parkinson’s Disease and a recent battle with leukemia. Mr. Julka was born on August 8, 1957 in Fond du Lac to Donald N. and Janet S. (Bothe) Julka. Mr. Julka graduated with the Class of 1975 from Goodrich High School and the Class of 1979 from UW-Whitewater. After graduation he worked as a bank examiner for the U.S. Treasury Department, before joining Hansen Refrigeration Machinery Co., Inc in June 1981, upon his father’s request. After his father’s death, Mr. Julka became the Executive Vice President, a title he held until his retirement in 2017, having contributed 36 years to the company. He was known for being a stickler for details and for his sharp memory which served him well over the course of his career. Despite his dedication to his career, Mr. Julka described his greatest life’s work as being a fully devoted father to his daughters Major Kimberly Jones, USMC (husband Lieutenant Commander Brian Jones, USN) of Stafford, VA and Bethany (husband Zach) Boness of Flagstaff, AZ. In the past several years, he enjoyed the additional duty of being a proud grandpa to Kim’s son Reece Jones and Bethany’s sons: Cooper and Bennett Boness. Mr. Julka is remembered as being a selfless and dedicated parent, leaving his girls wanting for nothing and supporting them in all of their endeavors with unmatched pride. As a social person who loved to engage in good conversation, Mr. Julka spent his time as a loyal member of fraternal organizations, including the Morning Kiwanis and the Fond du Lac Elks Lodge #57. He worked diligently as the State Chairman of the Elks U.S. Constitution Contest scholarship program for 26 years. The oldest of four children, Mr. Julka was a protective big brother and fiercely loyal to his family. He is survived by his sister Jane (Dean) Minardi with nephews Nicholas (Danielle) Minardi and Mitchell (Amber) Minardi, all of Duluth, MN; his brother J.R. (Mary Liz) Julka of Fond du Lac with nephew John (fiancee Libby) Julka of Milwaukee and niece Katie Julka of Madison; and brother James (Jerry Tenckhoff) Julka of Milwaukee; as well as dear great-nieces and great-nephews, cherished cousins, and beloved friends. VISITATION: The visitation for Mr. Jeffrey Julka will be on Thursday, October 7, 2021, from 5:00-7:00 PM, at Kurki Funeral Chapel, 31 E. Division St., Fond du Lac. Masks are appreciated. SERVICE: Mass of Christian Burial will be held at 10:00 AM on Friday, October 8, 2021 at St. Mary’s Catholic Church, 59 E Merrill Ave., Fond du Lac. Following services, inurnment will take place at Calvary Cemetery beside his mother and father. In lieu of flowers, memorials may be made to the Michael J. Fox Parkinson’s Foundation or the Leukemia & Lymphoma Society.

Jeffrey J. Julka, 64, of Fond du Lac, died on September 30, 2021, surrounded by family after a long journey with Parkinson&#8217;s Disease and a recent battle with leukemia. Mr. Julka was born on August 8, 1957 in Fond du Lac to Donald N.... View Obituary & Service Information

The family of Jeffrey J. Julka created this Life Tributes page to make it easy to share your memories.

Send flowers to the Julka family.