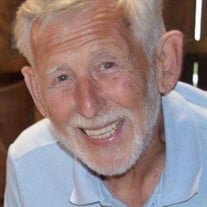 Jerome (Jerry) Joseph Boda, of Fond du Lac, passed away at home on Wednesday, October 16, 2019 after a battle with cancer. Jerry was born October 18, 1941 to Lawrence (Bud) and Ruth (Templin) Boda. He attended Goodrich High School where he played football and pole vaulted. Jerry loved boxing and was a member of the Golden Gloves Boxing League. In 1959, Jerry enlisted in the United States Army and was stationed in Germany until 1964. Upon returning from the Army, Jerry began his career as a butcher at Buehler’s Butcher Shop. Jerry’s passion to teach and help people led him to Lauer’s Food Mart. There he mentored employees on how to be the best butcher possible. At one point Lauer’s opened a restaurant and Jerry managed the restaurant until 1987. The very next year Jerry’s Legacy began - Boda’s Restaurant and Catering was opened. Jerry’s biggest accomplishment in life was being a single parent to his 4 children. In 1980 Jerry met the love of his life, Jane Floyd and on July 4, 1990 they were married at Lakeside Park. The joining of Jane and Jerry also brought another daughter into the family. Jerry was an avid hunter, fisherman and bowler. Hunting trips took him to Northern Wisconsin and Montana and his fishing trips to Canada. Jerry was always the ‘camp cook’ and made sure all his buddies were well fed. Jerry was instrumental in starting the Forest Gun Club, organizing the Dotyville Open Golf Tournaments and creating the Oxbo Tick Races. Jerry and Jane enjoyed traveling – Alaska, Hawaii, Florida, California and frequent trips to Las Vegas topped their list of favorites, however their travels to the UP with ‘Jerry’s Kids were unforgettable. They enjoyed ‘sock hops’ and were excellent dancers. Jerry had a passion for woodworking…from constructing Grandfather Clocks for the family to building birdhouses for the community – everyone benefited from his generosity. You could always count on Jerry to be a regular at his children’s’, grandchildren’s and great-grandchildren’s extra- curricular activities. From a professional perspective Jerry was a lifetime member of Eagles Aerie 270, the Wisconsin Restaurant Association and the National Restaurant Association. Jerry was a man of few words, but many actions. He was always willing to help in any way or give anything to anyone. Jerry would never ask for anything in return, but seeing people learn and succeed from his generosity was his reward. He had a huge heart that finally stopped but the legacies and influences he left behind will last forever. Survivors include his wife of 29 years, Jane. Daughters: Lori (Gary) Lloyd, Sue (Tim) Hanlon, Carey (Dan) Zemski – all of Fond du Lac; his sons: Terry (Houston TX) and Jeff (Hong Kong); his grandchildren: Justin (Nicole) Lloyd, Karissa (Dillon) Wittliff, Gabbi (Zach) and Joseph Hanlon, and Katie and Matthew Zemski; his great grandchildren: Peyton & Alyce Lloyd. He is also survived by his brother Fritz, and sisters: Janet Sinotte and Linda Abhold. Special friends include Tim Scannel and Mike Abler (‘adopted’ sons) and past and present Boda employees. Jerry was preceded in death by his parents, his sister Judy, and mother-in-law Katie Schafer, brother-in-law’s Melvin Sinotte and David Abhold, several other relatives and special friends. We would like to thank Stacy Haase, the Tim Scannel family, and Hospice Home Care for honoring Jerry’s wishes to remain at home. A very special Thank You to Larry Roxbury from Hospice for making Jerry’s journey peaceful and painless – we couldn’t have done it without you!! Visitation will be from 9:00 am – 11:30 am Saturday, October 19, 2019 at First Presbyterian Church, 1225 4th Street, Fond du Lac, followed directly by the memorial service officiated by Pastor Jack Harrison and Chaplain Karen Kraus. A military tribute will be held immediately after the memorial service at the church. A Celebration of Life and luncheon will be held at the Eagles Club, 515 N Park Avenue immediately following the military tribute. Cremation has taken place. In lieu of flowers, donations can be made directly to Hospice Hope.

Jerome (Jerry) Joseph Boda, of Fond du Lac, passed away at home on Wednesday, October 16, 2019 after a battle with cancer. Jerry was born October 18, 1941 to Lawrence (Bud) and Ruth (Templin) Boda. He attended Goodrich High School where he... View Obituary & Service Information

The family of Jerome "Jerry" J. Boda created this Life Tributes page to make it easy to share your memories.

Send flowers to the Boda family.