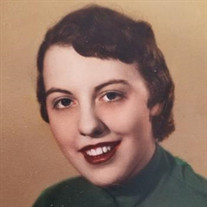 Joan M Matthews (nee Brown) passed away on December 24, 2019 at the Hospice Home of Hope. She celebrated the birth of her Savior in heaven with the angels. Joan was born on July 20, 1935 in Fond du Lac, WI. Joan pursued a variety of interests after graduating from Random Lake High School. Her journeys took her to a variety of places but ultimately, she returned to her roots and settled back at home in Fond du Lac with her husband, Harry Matthews. Joan and Harry were entrepreneurs. They owned and operated several businesses including the minor bar at Columbia Park and Harry’s Lakeview. Joan obtained her real estate license in 1967 and was proud of the fact that she held a valid license until early in 2018. Real Estate was a passion that Joan pursued with vigor. It was a career that best suited her natural abilities. Joan acted as broker at Wauwatosa Realty until opening Matthews V Realty which was the first company that was franchised in Fond du Lac. She was both an ERA and Century 21 broker house until finally relinquishing the franchise to continue in her later years as Stars USA. During her career, Joan served as the 1st woman President of the Fond du Lac Board of Realtors and was instrumental in the establishment of the Fond du Lac Multiple Listing Service. She was also recognized by the local Board as a Realtor of the Year. That honor meant a lot to her. Joan loved real estate and loved working with customers and maintaining rental properties until she could no longer do so. She always said that she wished that all people could enjoy their work and career as much as she did because it was a blessing. Joanie’s determination and drive impacted everyone. She was a one-of-a-kind woman and her legacy is one that will be remembered by many. She was a force. Anyone that truly knew her knows how true this is. Joanie is survived by her husband of 62 years, Harry as well as by her daughter Paula Thalacker (Brian), 2 sons, Tom (Karen) and Mike (Andrea Wimmer) and 1 stepson, Cary (Phyllis) of Dubuque, IA. She is also survived by 11 grandchildren, 8 great grandchildren and her sister, Judy Braun (Mike Herzer). Faithful friends include Jill, Kathy and Janet. Shelly Swenson was special to Joan and was her right hand helper and best loved assistant. Joan’s family is extremely thankful for Shelly and for her faithfulness. Joan was preceded in death by her parents, Clarence and Marie Brown, and her sister, Shirley Wirtz. Special Thanks and appreciation to the Hospice House of Hope caregivers who have such huge servant hearts and who serve with such grace. Those of us left behind with our personal memories of Joan can be certain of one thing for sure…she will busy herself in heaven not just praising Jesus but also by finding and preparing just the right parcel of real estate for each of us when we join her. Private family services and a celebration of Joan’s life will be held at a later date. Memorials may be directed to Hospice Home of Hope, 400 County Road K, Fond du Lac, WI 54937.

Joan M Matthews (nee Brown) passed away on December 24, 2019 at the Hospice Home of Hope. She celebrated the birth of her Savior in heaven with the angels. Joan was born on July 20, 1935 in Fond du Lac, WI. Joan pursued a variety of interests... View Obituary & Service Information

The family of Joan M. Matthews created this Life Tributes page to make it easy to share your memories.

Send flowers to the Matthews family.