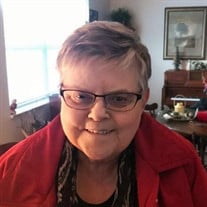 Joan Irene (Gibson) Scheer, 85, of Fond du Lac, passed away peacefully on Wednesday, December 9th, from complications due to Covid-19. Born April 18, 1935 to George and Ruth (Becker) Gibson in Fond du Lac, WI. She married Eugene Scheer on July 14, 1951 at St. Matthew's Methodist Church in Fond du Lac. They would have celebrated their 70th wedding anniversary in July. She was a member of Salem United Methodist Church for many years where she taught Sunday School and participated in many bible studies. Her interests were playing the piano, working on their yard and their flowers, and decorating their home. Joan and Gene knew how very blessed they were in raising their children and having many grandchildren and great grandchildren, which brought them great joy. Joan was the most precious person in the world to Gene and together their love made the perfect description of a loving couple. Joan is survived by her husband, Gene; their five children, Barb (Don) Drollinger of Chippewa Falls; Gary (Lu) Scheer of Waupun; Annette (Mark) Erickson of Fond du Lac; Mark (Mary) Scheer of Oshkosh; and Tom (Kari) Scheer of Neenah; 14 grandchildren; 10 (with one on the way) great grandchildren; sister-in-law, Jean Scheer of Fond du Lac and special family friends, Norm and Julie Francis of Fond du Lac. She was preceded in death by her parents; brother, Franklin Gibson; sister, Shirley (Howard) Schroeder; father and mother-in-law, Frederick and Florence (Steiner) Scheer; sisters-in-law, Jeanette, Virginia and Betty Scheer; brothers-in-law, Donald Scheer and Robert (Audrey) Scheer. Joan's family would like to thank all the staff at Woodlands Senior Park, St. Agnes Hospital Emergency Department and the Covid Unit, to Dr. Gina Everson and her nurse Kay Sesing for all their compassionate and exceptional care given to her. Any memorials may be directed to Salem United Methodist Church, 120 Sheboygan Street, FdL, WI 54935. Cremation has taken place. Due to Covid 19, a memorial service will be held at a later date.

The family of Joan I. Scheer created this Life Tributes page to make it easy to share your memories.

Send flowers to the Scheer family.