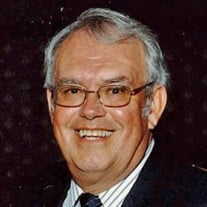 Joel Michael Brandau, 76, of Fond du Lac, peacefully passed away on Saturday, August 28, 2021, at Crossroads in Fond du Lac, WI. Joel was born on July 8, 1945, in Sparta, WI, the son of George A. and Norma L. Buchholz Brandau. He graduated from Sparta High School in 1963. He then entered the Navy and was stationed in Key West, Florida for 3 ½ years. He attended the State Patrol Academy, graduating in April of 1969. On March 1, 1969, he married Vicki L. Meyer at St. John’s Lutheran Church in Sparta, WI. They moved to Fond du Lac, WI, where Joel started his career as a State Patrolman for District 3. After 33 years as a State Patrolman and Court Officer at the Fond du Lac City/County Building, he retired in February 1998. From there he kept busy in retirement by re-living his younger years of working at Jones Fairway grocery store in Sparta, by being a bagger at Pick N Save. Then moving on to be a dealer trade driver for Holiday Automotive, which he enjoyed immensely. Joel was a member of St. Peter’s Ev. Lutheran Church, serving on church council and board of church properties, he was a church elder and usher. Joel was an avid golfer, walking the links well into his late 60’s. He also was a league bowler for many years. He liked to play cards with his many golfing and bowling buddies over the years. He was a fan of the Green Bay Packers, Wisconsin Badgers and enjoyed watching Nascar races at a variety of tracks around the USA. His greatest joy was watching his children and grandchildren in all of their sports and musical events. He is survived by his loving wife of 52 years, Vicki Brandau of Fond du Lac, his children: Jackie (Ben) Dumke of Neenah, WI and Jacob (Amy) Brandau of Westfield, IN; his grandchildren: Brett Dumke, Ava Brandau and Jack Brandau; his mother Norma Brandau of Sparta, WI, his sister Jean (Bill) McArthey of Green Bay, WI and his brother John (Mary) Brandau of Sparta, WI. He is preceded in death by his father George Brandau and numerous aunts and uncles. VISITATION: Friends may call from 5:00 – 8:00 PM on Wednesday, September 1, 2021, at Kurki Funeral Chapel, 31 East Division Street, Fond du Lac and again from 9:30 – 11:00 AM on Thursday, September 2, 2021, at St. Peter’s Ev. Lutheran Church, 1600 South Main Street, Fond du Lac. SERVICE: Funeral services will be held at 11:00 AM, on Thursday, September 2, 2021, at St. Peter’s Ev. Lutheran Church, with Rev. Michael J. Zuberbier officiating. Burial will be held at 10:30 AM on Friday, September 3, 2021 at St. John’s Ev. Lutheran Cemetery in Sparta, WI In lieu of flowers, memorials appreciated to St. Peter’s Ev. Lutheran Church.

The family of Joel Michael Brandau created this Life Tributes page to make it easy to share your memories.

Send flowers to the Brandau family.