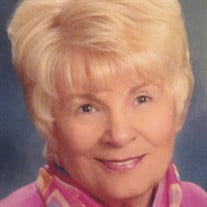 Judy A. Stevenson, a resident of Fond du Lac, died December 16, 2020. She was born on July 21, 1937, in Fond du Lac, a daughter of Adam C. and Florence E. Berkholtz Beyer. She grew up on Lake de Neveu and was an avid swimmer, diver, and waterskier. Judy was a graduate of Fond du Lac Senior High School, Class of 1955. She married Fred Ophoven in 1957 and divorced in 1975. She was employed through the years at Mercury Marine, Fond du Lac School Supply, First Federal Savings and Loan and the Red Owl. Judy also had her own business painting and selling wearable art. On February 11, 1978, she married John C. Stevenson. When he retired in 1989, they wintered in Bokeelia, Florida for 16 years. That is when she pursued her watercolor interest. She studied under many national artists and sold her work in galleries and at art shows throughout southwest Florida and Wisconsin. She won many awards for her art and was named Fond Du Lac “Artist of the Year” in 2013. Judy moved back to Fond du Lac in 2006 when her husband became ill. After he passed away in 2010, she traveled extensively. She had a passion for art, photography, and gardening. Wherever she lived, she always had a beautiful flower garden. She was a member of Pilgrim United Church of Christ and also belonged to P.E.O. Survivors include her two sons: Terry Ophoven of Adams Friendship, Wisconsin, and Mark (Debbie) Ophoven of Ozark, Missouri; a stepdaughter, Kate Stevenson of San Francisco; two grandchildren: Ashley Ophoven of Springfield, MO and Aime (Josh) White of San Francisco. She is further survived by a brother, Al (Gail) Beyer of Oshkosh; and two nieces and a nephew. She was preceded in death by her parents, and her husband, John on August 12, 2010. A celebration of life will be held at Pilgrim United Church of Christ, Fond du Lac, at a later date. There will also be a show and sale of her artwork, to benefit the FDL Art Foundation. Cremation has taken place and inurnment will be at Shrine of Rest Mausoleum in Ledgeview Memorial Park. In lieu of flowers, gifts in Judy’s name may be sent to the John and Judy Stevenson Memorial Fund (for the Arts) at the Fond du Lac Area Foundation, 384 N. Main Street Unit 4, Fond du Lac, WI 54935 or Pilgrim United Church of Christ 535 Stow Street, Fond du Lac, WI 54935.

Judy A. Stevenson, a resident of Fond du Lac, died December 16, 2020. She was born on July 21, 1937, in Fond du Lac, a daughter of Adam C. and Florence E. Berkholtz Beyer. She grew up on Lake de Neveu and was an avid swimmer, diver, and waterskier.... View Obituary & Service Information

The family of Judy Stevenson created this Life Tributes page to make it easy to share your memories.

Send flowers to the Stevenson family.