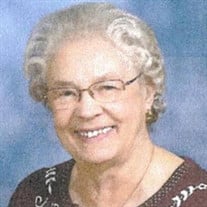 Kathryn Ann (Lohry) (McCarthy) Curran, passed away Tuesday, September 28, 2021, at Sage Meadows Assisted Living on Kingswood Avenue in Fond du Lac. Kathryn was born, in Fond du Lac, on December 15, 1929. She was the seventh child of Frank and Elsie (Reimer) Lohry. She married Eugene F. Curran, on June 9, 1981. Kathryn was a member of Salem United Methodist Church in Fond du Lac. She worked at Sears for 29 years and for the Fond du Lac Clinic for ten years. Kathryn and Eugene moved to Tucson, AZ, in 1989 where she volunteered at St. Mary's Hospital for seven years. They relocated to Silver City, NM, where she was active in the Women's Club, Elks and Gila Regional Hospital auxiliary. After Eugene's passing in 1997, Kathryn returned to Fond du Lac in 1999 to be closer to her family. She then volunteered in many areas of SSM St. Agnes Hospital and at the Fond du Lac Senior Center. She was treasurer for the American Legion Auxiliary, the United Methodist Women and the Elks Lodge Auxiliary. Kathryn is survived by five daughters: Linda (Jerry) Jaye of Fond du Lac; Yvonne Bohan of Tucson, AZ; Mary Curtis of Neenah; Christine (Timothy} Wonser of Oshkosh; and Beverly (Scott) Vossekuil of Van Dyne. She is also survived by 11 grandchildren, 27 great-grandchildren, 13 great-great-grandchildren and three step-children: Brad (Bonnie) Curran of Oshkosh; Michelle Janelli of Oceanside, CA; and Brian (Vonal) Curran of Fond du Lac. She is further survived by seven step-grandchildren, five step-great-grandchildren and one step-great-great-grandchild. She is also survived by her last remaining sibling, younger brother Kenneth (Ann) Lohry of Omro. Kathryn was preceded in death by her parents, her husband Eugene, brothers: Harvey, Raymond and Harold Lohry; sisters: Marion Asaikainen, Ruth Buelow, Marjory Schmidt, and Beverly Millard; and by step-son-in-law Carl Janelli. The family profoundly thanks the many staff members of Agnesian Hospice and Sage Meadows Assisted Living on Kingswood Avenue who Mom grew to love. Their effort and dedication are greatly appreciated. Because of her surviving numerous medical issues over the past few years, she learned to appreciate the nickname that was bestowed upon her: Energizer Bunny! Kathryn generously donated her body to the University of Wisconsin for medical research and training. A Memorial Service is being planned for late spring and notice will be published in The Reporter.

The family of Kathryn Ann Curran created this Life Tributes page to make it easy to share your memories.

Send flowers to the Curran family.