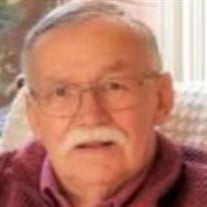 On the crisp, Wisconsin fall morning of October 25th our dad, Louis Frederick (Fred) Martin, passed away after a short bout with ill health. Dad was born on March 2, 1937 the youngest of seven children to Gilbert and Eleanor (Gundrum) Martin in Lomira, Wisconsin. Dad had many fond memories of growing up in Lomira, especially tagging along with his father to the train depot, where his father worked as a Railroad Telegrapher igniting dad’s lifelong passions of telegraphy and trains. He graduated with the class of 1956 from Lomira High School where he excelled in baseball. Soon after graduation, he joined the Navy where he was stationed in Japan, perfecting his craft as a Cryptologic Technician (morse code intercept operator). Upon his return, he met Patricia Anne Swalby and on January 14th, 1961 they married at St. Mary’s Church in Fond du Lac, WI. He and mom had four children: Susan, Marty, Mary, and Micky. In 1961 dad was hired as a Patrolman for the City of FdL Police Department, badge number 58 - “58 The Great.” In 1974 he was promoted to detective and retired in 1994 as Captain of Detectives. For over 30 years dad served the citizens of Fond du Lac with integrity, honor, and compassion. On many occasions, especially holidays, dad invited a person down on their luck to join family dinners. Dad was a man of varied interests, depending on the season of his life. He was present at the 1967 Ice Bowl. He thoroughly enjoyed life on the lake whether fishing, sturgeon spearing, or reading a book. He also enjoyed listening to Polka, ham radio (NU9P), and traveling the countryside on his Fairmont railcar. He was very proud of his German heritage, traveling there to enjoy the culture - especially the food. He was a huge fan of the Brewers and cherished spending time with his grandchildren and great grandchildren. Thanks to dad’s foresight, the family received Packer season tickets after over 50 years on the waiting list! One could often find dad cruising up the East Shore of Lake Winnebago, stopping to buy pickled goodies from his ‘people’ and visiting old friends. Dad is survived by children: Susan (Richard) Rodriguez and their children Nichole (great grandchildren Elijah, Raya, Cruz), Gabriel Rodriquez (Hillary), Ricky Rodriguez (Gracie), Viviana (Joe) Rodriguez, Marty (Lauren) Martin and their children Kelle and Erik, Mary Martin, Micky Burns-Johnson (Jeff Johnson) and their children Colin Burns (fiancé Kate Morrissey), Shannon Burns (Luke Bartel), Curtiss Johnson, and Grant Johnson (Lauren DeSmidt). Pat’s sisters Sharon (Tom) Scallon and Debbie (Bob) Heinz. He is further survived by a brother, Donald Martin and a special nephew and companion Dale Luedtke, several nieces and nephews, and many lifelong friends. Preceding him in death was his beloved wife Pat in May 2019, his son-in-law Terry J. Burns, daughter-in-law Kim Mooney, his parents, siblings Eleanor Zibung, Geraldine (Geri) Olsen, Marietta Scheid, Eileen Luedtke, and Gilbert Martin. The family wishes to thank his neighbors John and Judy for their friendship, and to Dr. Sergi for his years of care. There will be private family services. We love you, dad. Thanks for everything.

On the crisp, Wisconsin fall morning of October 25th our dad, Louis Frederick (Fred) Martin, passed away after a short bout with ill health. Dad was born on March 2, 1937 the youngest of seven children to Gilbert and Eleanor (Gundrum) Martin... View Obituary & Service Information

The family of L. Fred Martin created this Life Tributes page to make it easy to share your memories.

On the crisp, Wisconsin fall morning of October 25th our dad,...

Send flowers to the Martin family.