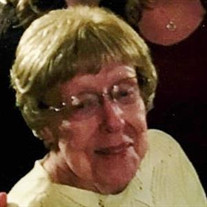 LaVerne H. Potts, 90, of Fond du Lac, entered eternal life on Saturday, April 6, 2019, at Woodlands Senior Park, with her loving family at her side. She was born on January 24, 1929, in Sheboygan, the daughter of Milton B. and Edna I. Bartzen Schreiber. She graduated from Sheboygan North High in 1947, followed that with WI State Teacher’s College where she earned a BE in Education. She taught commercial subjects at Wisconsin Dells High and also her alma mater at Sheboygan North. She married her college sweetheart, Don Potts on August 20, 1951. He preceded her in death on October 14, 1997. After her three daughters were all started in school she worked as a legal secretary for 24 years, which she found to be very interesting and exciting. Upon Don passing away, she started working at Hope Lutheran Church in Fond du Lac in their offices as a volunteer and met many new people of the congregation over her 14 years there. LaVerne’s interest and hobbies included camping at their site at Pearl Lake Campground, travel to all but 6 states, plastic needlepoint, embroidery, reading mystery novels and knitting dish clothes for friends and relatives. She is survived by her daughters: Christine Abraham and Cynthia (Peter) Ozolins both of Fond du Lac; her grandchildren: Julie (Ben) Abraham-Gifford, Lynn (fiancé Tony Demos) Abraham, Mike Abraham, Pamela (Ryan) Barr and Melissa (Timothy) Peters and Angela (John) Crape, eleven great grandchildren, her brother Stanley Schreiber of Sheboygan, one nephew Scott (Marcia) Schreiber of Sheboygan, one great-nephew, and special friends Milt and Pat Ohlinger. She is preceded in death by her parents, her husband Donald, her daughter Lee Ann Potts, son-in-law Richard Abraham, her brother Milford Schreiber and two sister-in-laws, Nancy and Barbara Schreiber. Cremation has already taken place.

LaVerne H. Potts, 90, of Fond du Lac, entered eternal life on Saturday, April 6, 2019, at Woodlands Senior Park, with her loving family at her side. She was born on January 24, 1929, in Sheboygan, the daughter of Milton B. and Edna I. Bartzen... View Obituary & Service Information

The family of LaVerne H. Potts created this Life Tributes page to make it easy to share your memories.

Send flowers to the Potts family.