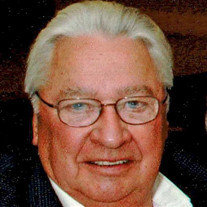 Leonard P. Weidner, 84, of Ripon, died on Tuesday, January 29, 2019, at St. Luke’s Medical Center, in Milwaukee. He was born on January 20, 1935, on the family farm in Springvale, the son of William P. and Bessie B. Baird Weidner. He was a graduate of Goodrich High School. Leonard volunteered for the military draft in 1952, during the Korean War and was stationed in Germany. He was discharged in 1955. He was married to Elizabeth “Betty” Kleezka in Manhattan, KS on October 24, 1953. She preceded him in death on August 13, 1998. Leonard owned and operated Weidner Highway Service Texaco Station from 1958 to 1970. He then owned Weidner GMC from 1970 to 1986. He enjoyed traveling, working on anything mechanical, and spending time with his family. Leonard was known for his great sense of humor. He is survived by his son, Craig Weidner of North Fond du Lac, his grandson, Michael (Kimberly) Weidner of Seymour, WI and three great-grandchildren: Ania, Zachary, and Michael; his sister: Hazel Wirkus of Fond du Lac, his special friend, Karen Sisk of Mesa, AZ and many nieces and nephews. He is preceded in death by his parents, his wife, his son, Collin, his daughter Colleen, and his sister Millie McAuly. At Leonard’s request private family memorial services will be held at Kurki-Mach Funeral Chapel & Crematory. In lieu of flowers, memorials appreciated to Children’s Heart Foundation. Kurki-Mach Funeral Chapel & Crematory is serving the family, www.kurkimachfuneralchapel.com. 920-921-4420

The family of Leonard P. Weidner created this Life Tributes page to make it easy to share your memories.

Send flowers to the Weidner family.