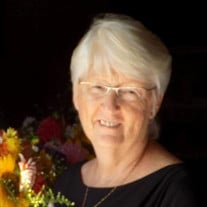 Linda passed away on October 10, 2021, at St. Agnes Hospital in Fond du Lac, Wisconsin and went into the arms of her savior. Linda was born in Chicago, Illinois, on August 15, 1948, to Willis and Shirley Smythe. She was the oldest daughter of three. Linda graduated from Goodrich High School in 1966 and later attended Beautician School in Portage. She married David Heinle on January 31, 1970, and they had three children. Linda worked at a variety of Salons cutting hair, she later moved to Grand Rapids, Minnesota, where she was Personnel Manager at K-Mart, then worked most of her life as a cashier at Gordy's Grocery Store in Grand Rapids. Linda moved back to Fond du Lac, in 2007 and met her significant other, Jim Nolan in 2008. They had spent the last 14 years together, living in Florida and Mexico in the winters and Wisconsin in the summers. The two of them enjoyed traveling together and rooting for the Brewers and Packers. She was a devote Christian and was ready to meet Jesus. Linda was a lover of the Lord first, her kids and grandkids were all so special to her. She had an ear for good music, enjoyed crocheting, playing cards and going to the pool with friends. Linda's significant other Jim Nolan, passed away one day after Linda. She is survived by her children, Todd (Deb Baker) Heinle, Mark (Robyn) Heinle and Ann (Kevin) Koetz. Her grandchildren, Zack (Shelbi), Zoey, Tayler, T.J., Ben, Megan, Brooke and Casey. Great-grandchildren; Jayden, Brecken, Daxten and Emerix. Sisters, Melody Mason and Debbie (Mark) Koehler, Jeaneen (Rick) Goetsch, Joe and John Smythe. VISITATION & SERVICE: There will be a dual service with her significant other, Jim Nolan, at Uecker-Witt Funeral Home, 524 N. Park Avenue, Fond du Lac, on Friday, October 15, 2021, from 3:00-7:00 pm, with a memorial service at 7:00 pm. There will be a service at a later date in Grand Rapids, MN for family and friends as well.

Linda passed away on October 10, 2021, at St. Agnes Hospital in Fond du Lac, Wisconsin and went into the arms of her savior. Linda was born in Chicago, Illinois, on August 15, 1948, to Willis and Shirley Smythe. She was the oldest daughter... View Obituary & Service Information

The family of Linda Sue Heinle created this Life Tributes page to make it easy to share your memories.

Send flowers to the Heinle family.