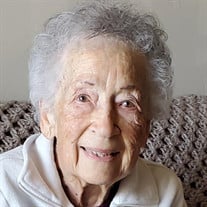 Lucille M. Kemnitz, 88, of North Fond du Lac, went home to heaven on Thursday, January 21, 2021. She was born on June 11, 1932, in the Town of Empire, the daughter of Ernest A. and Bertha P. Reitz Gantner. Lucille was married over 67 years... View Obituary & Service Information

The family of Lucille M. Kemnitz created this Life Tributes page to make it easy to share your memories.

Send flowers to the Kemnitz family.