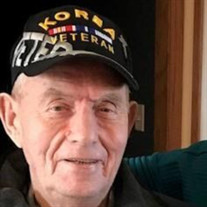 Lyle Richard Schmidtke, 84, of North Fond du Lac, died on Sunday, October 18, 2020, with his family by his side. He was born July 10th, 1936 in Kaiser, WI to Peter and Ethelle (Smith) Schmidtke. Lyle was raised in Highbridge, WI and graduated from Mellen High School in 1954. Immediately following graduation, Lyle enlisted in the U.S. Army. He proudly served his country during the Korean War as a Cryptosecurity Specialist where he earned the Good Conduct Medal and National Defense Service Medal. Following his honorable discharge from the Army, Lyle worked as a Conductor for the Soo Line and Canadian Pacific Railroads in Ashland, North Fond du Lac and Portage for 42 years, retiring on July 1, 1998. Lyle married Karen Jane Jones on April 9th, 1960. They recently celebrated their 60th wedding anniversary. Lyle was a hands-on father, supporting their four sons in numerous sporting events and extracurricular activities. He was an extremely talented woodworker and his children and grandchildren treasure the special pieces he made for them. Lyle spent many hours traveling to his grandchildren’s sporting events….rarely missing a game, meet or match. He also enjoyed times spent fishing and hunting with family and friends. He treasured the great times spent together more than a trophy on the wall. Lyle was always up for a lively card or cribbage game and his family and friends will treasure those memories. One of Lyle’s proudest moments was his trip to Washington D.C. on the Honor Flight with his son Rick. Lyle is survived by his wife Karen, four sons: Reverend Scott (Reverend Kathleen), Rick (Dee), Tom (Diane) and Mike (Chauncey Hunker); four grandchildren: Kelly (Joe) Steger, Tommi (Alex) Bernklau, Tim (Erica Meulemans) and Brooke; step-granddaughter Makayla Reed-Schall; five great-grandchildren Harland Steger, Odin Bernklau, Sydney, Aiden and Nadia Reed-Schall; two brothers: Robert and Kenneth (Barbara), three sisters: Laura Hinton, Pat Hilton and Betty Munoz. Lyle is also survived by numerous brothers-in-law, sisters-in-law, nieces and nephews. He was preceded in death by his parents and three sisters: Dorothy Christianson, Jeanette DeLeasky and Helen Nelson; and by his step-granddaughter Dr. Elizabeth Loar. He was bullet-proof! He was a family man and great friend who was always loving but tough when needed. He quietly helped anyone in need. We feel blessed to have wonderful memories that will last us a lifetime. Graveside services with full military honors will be held at noon on Saturday, October 24, 2020, at Cayuga Cemetery, Town of Morse. Memorials are appreciated to the Stars and Stripes Honor Flight Wisconsin or the charity of one’s choice. The family wants to sincerely thank the staff at the William S. Middleton Memorial Veterans Hospital in Madison, the VA Beaver Dam Clinic and SSM Agnesian HealthCare in Fond du Lac for their compassionate care during the last several years. Kurki Funeral Chapel & Crematory is serving the family, www.kurkifuneralchapel.com. 920-921-4420

Lyle Richard Schmidtke, 84, of North Fond du Lac, died on Sunday, October 18, 2020, with his family by his side. He was born July 10th, 1936 in Kaiser, WI to Peter and Ethelle (Smith) Schmidtke. Lyle was raised in Highbridge, WI and graduated... View Obituary & Service Information

The family of Lyle R. Schmidtke created this Life Tributes page to make it easy to share your memories.

Send flowers to the Schmidtke family.