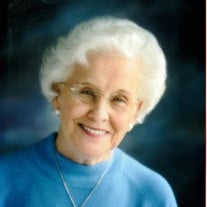 Marie Kenyon Rosenfeldt of Fond du Lac went to be with her Lord and Savior in the early morning hours of January 8, 2021. Born in Waupaca on June 23, 1927, the year Lindberg flew the Atlantic, she grew up in Oakfield Wisconsin, where her family settled in 1933. She attended Winnebago Lutheran Academy High School for two years but graduated from her hometown Oakfield High School in 1945, when war time gas rationing kept everyone closer to home. Marie later attended and graduated from Prospect Hall, a Milwaukee secretarial school. While studying in Milwaukee, Marie and Bill Rosenfeldt rekindled an old relationship. Oakfield classmates from the first grade, they married on June 14, 1952 and settled in Fond du Lac. Marie served as secretary for the administrator of Columbia Hospital and later for prominent Fond du Lac attorney Kenneth Worthing. Bill and Marie had two sons, John and Paul. While raising her children, Marie was active in PTA and taught Sunday school. In 1964, she began volunteer work at Saint Agnes Hospital as a “gray lady.” She continued volunteer work at Saint Agnes until 2000. Marie also served on the St. Agnes Hospital Foundation and Fond du Lac Area Foundation Boards of Directors. Aside from being the best wife and mother she could be, Marie’s passions were genealogy and American history. She traced her ancestry to two revolutionary war veterans and the Mayflower. Marie was a proud member of Daughters of the American Revolution, Colonial Dames of America and the Mayflower Society, to name a few such organizations. She was also a longtime member of the Fond du Lac PEO, Chapter K. Marie served as Regent of the Fond du Lac chapter of the DAR and held various state-level offices in these societies. Our earliest family trips led us around the state, visiting a succession of old mansions and other historical sites. In later years, Bill and Marie traveled the world. Marie was proud to be an American. Whenever asked about her ethnic heritage, her answer was simple: “I’m an American, period.” Marie also loved animals, especially dogs and cats: any size, any shape, any kind, any color—they were sure to garner her affection. She was especially fond of Dexter, the top dog at Touchstone Living Center. Marie’s husband, Bill Rosenfeldt, passed away in 1998. Marie was also predeceased by her parents, cattle dealer David C. Kenyon and his wife, Dorothy, older brother, John Kenyon, daughter-in-law, Kathleen Rosenfeldt and sister-in-law, Gudrun (“Gudie”) Kenyon. Marie is survived by her younger brother, David S. Kenyon, her sons, John (Cathy) Rosenfeldt and Paul (Karin) Rosenfeldt, grandchildren, Tony Rosenfeldt, Mike Rosenfeldt, Rachel Semenas, Jenna Thurin and Krista Mallas, and seven great grandchildren. She is further survived by niece, Carol (Todd) Dekker, and nephews, David (Betsy) Kenyon and Tom Kenyon. The family will receive visitors at Hope Lutheran Church from 11 am to 1 pm on Friday, January 15th. There will be a Christian funeral service at 1 pm, followed by a luncheon and internment at Avoca Cemetery in Oakfield. We sincerely thank Agnesian Hospice Hope and staff at Lakeview Place and Touchstone Living Center for their caring and compassionate service. In lieu of flowers, please direct memorials to The Hope Lutheran Church Building Fund, Agnesian Healthcare Hospice Hope and the Agnesian Healthcare Foundation.

Marie Kenyon Rosenfeldt of Fond du Lac went to be with her Lord and Savior in the early morning hours of January 8, 2021. Born in Waupaca on June 23, 1927, the year Lindberg flew the Atlantic, she grew up in Oakfield Wisconsin, where her family... View Obituary & Service Information

The family of Marie Rosenfeldt created this Life Tributes page to make it easy to share your memories.

Marie Kenyon Rosenfeldt of Fond du Lac went to be with her Lord...

Send flowers to the Rosenfeldt family.