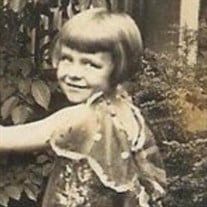 Marilyn McCallum passed away peacefully surrounded by family on January 30, 2022. Marilyn Joy Libke was born April 7, 1926, in Two Rivers, WI to parents Irmajean Helen Karnopp Libke and Werner Jurgen Libke whose ancestors immigrated from Schleswig-Holstein. She did her primary schooling in New Holstein and Fond du Lac schools. Marilyn was always active, enjoying ice and roller skating, biking, swimming and tree climbing in her youth. “In retrospect,” she recalled, “I think I was a bit of a handful. And probably not a little bit of a spoiled brat!”. She was an only child until age nine when her sister, and best friend, Margie was born. Marilyn was an extrovert, easily making friends. Even at 95 years old she loved meeting new people and could charm even the crustiest of strangers! She loved to cook, work in her garden, and was an avid reader with a life-long love of mystery books, especially the Fu Manchu detective series when younger. Marilyn was a talented musician and artist. She played the alto clarinet for both New Holstein and Fond du Lac school bands. She was an accomplished pianist. And she was the first violinist for the Fond du Lac Symphony Orchestra, led by Maestro Luigi Lombardi. When she graduated from L.P. Goodrich High School in 1943, she had the distinct honor of being the violin soloist at the graduation ceremony. She was awarded a musical scholarship to Miami University in Oxford, OH but declined it, choosing instead to support the war efforts with a job in Washington D.C. At seventeen years old, Marilyn took the train east and began working for the F.B.I. as a fingerprint interpreter. During this time, she was chosen to greet First Lady Eleanor Roosevelt and provide a tour of where the “common folk” lived. After a year working for the F.B.I. Marilyn returned to Wisconsin and enrolled in the University of Wisconsin’s Music and Journalism program. After a year, she again returned to Washington to earn another year’s college tuition. This time, she worked as a “government girl” in the procuring section of the War Department inside the Pentagon. She was in the Pentagon’s central courtyard when Generals McArthur and Eisenhower were paraded around the area in a homecoming celebration. When the war ended, Marilyn returned to the Midwest, working in the naval offices at the Great Lakes training station. On February 21, 1948 she eloped with her sweetheart, George Duncan McCallum. They married in Mason City, Iowa. Both sports fans, the newlyweds attended a UW vs Iowa basketball game in lieu of taking a honeymoon. Eventually, they settled in Fond du Lac, raising four children and spending the years leading scout troops, coaching little leagues, attending school activities, family camping trips, and summers spent at their cottage on Berry Lake in Cecil, WI. Marilyn worked 17 years at Sears-Roebuck and then another 17 years for First Wisconsin (now US Bank). She and George were privileged to have traveled throughout Europe, Nova Scotia and the Virgin Islands – as well as throughout the United States. Marilyn is survived by her sister Margie Eberhart (Bill), sons Governor Scott McCallum (Laurie), John McCallum (Sara) and Charles McCallum, daughter Ann Blamey (Richard), eight grandchildren, and 16 great grandchildren. There are no plans for a funeral, but friends can celebrate Marilyn’s love for reading by making a contribution to the Fond du Lac Public Library (in memory of Marilyn McCallum), 32 Sheboygan Street, Fond du Lac, WI 54935, or online at www.fdlpl.org.

The family of Marilyn J. McCallum created this Life Tributes page to make it easy to share your memories.

Send flowers to the McCallum family.