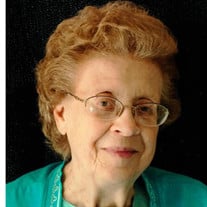 Myrna Schubert died peacefully at home on Friday, July 9, 2021, age 94. She was born in Fond du Lac, Myrna Wilma Kettler, to Erving and Clara Pomplin Kettler on Dec. 7th 1926. She married Harold Schubert of Pipe in Sept. 1947 and they had 3 children: Karen, Mark and John. Karen married Jack Wise of Tucson and moved to Arizona in 1971. Karen and Jack had one daughter, Robin, who married Nick Robertson and they have two kids: Madison and Parker. The Robertsons were able to make the trip to Wisconsin in June to see Myrna and we're all grateful that Mom was still in good shape and able to enjoy the visit. Myrna had a sister Jeanne, two years younger, married to Eugene Arnold, both deceased. Eugene's sister Delores Berger still lives in Fond du Lac and keeps in touch. Myrna and Harold were lifelong members of St. Peter's Lutheran Church in Fond du Lac where she was baptized and confirmed. She graduated from Fond du Lac High School in 1944 and attended college in Madison for two years. She played piano and saxophone and played sax in the high school band and at Madison. When they were younger, she and her sister Jeanne would play in public as a duo. When Harold returned from the war in 1945, he took over his father's store in Pipe --Schubert's Grocery & Hardware. When he married Myrna in 1947, they ran the store until they sold it to Willard and Mary Hemauer in 1970. Myrna continued to work in the store for Hemauers to keep in touch with local friends and neighbors. She was a member of the Homemakers for many years and they still remember her. She loved to knit and do needlework and was proud of the fact that she knit over 100 baby caps for newborn infants. After Harold died in 1991, she got together regularly with old high school chums Pat Dilling and Janet Clochesy, also both widows. Janet died several years ago. I know Pat will miss Myrna greatly. Myrna lived longer than any of her predecessors and any of her cousins. She still has two living cousins: Ralph Miller of Florida and his sister Ella who lives in Austria, ages 91 and 88. She was preceded in death by her in-laws Leona and Wilmer Reichmann Sr. and Virginia and Waldo Nelson, also by her son-in-law Jack Wise. All her nieces and nephews are still around and they were all very fond of her. We'd like to thank all the hospice nurses who came out to the house in the past year to help and advise. They were an excellent help and support. VISITATION: Friends may call from 1:00 – 3:00 PM on Tuesday, July 20, 2021, at St. Peter’s Ev. Lutheran Church, 1600 South Main Street, Fond du Lac. SERVICE: Funeral services will be held at 3:00 PM on Tuesday, July 20, 2021, at St. Peter’s Ev. Lutheran Church, with Rev. Michael J. Zuberbier officiating. Entombment to will take place at 1:00 PM on Wednesday, July 21, 2021 at Shrine of Rest Mausoleum in Ledgeview Memorial Park.

Myrna Schubert died peacefully at home on Friday, July 9, 2021, age 94. She was born in Fond du Lac, Myrna Wilma Kettler, to Erving and Clara Pomplin Kettler on Dec. 7th 1926. She married Harold Schubert of Pipe in Sept. 1947 and they had 3... View Obituary & Service Information

The family of Myrna W. Schubert created this Life Tributes page to make it easy to share your memories.

Send flowers to the Schubert family.